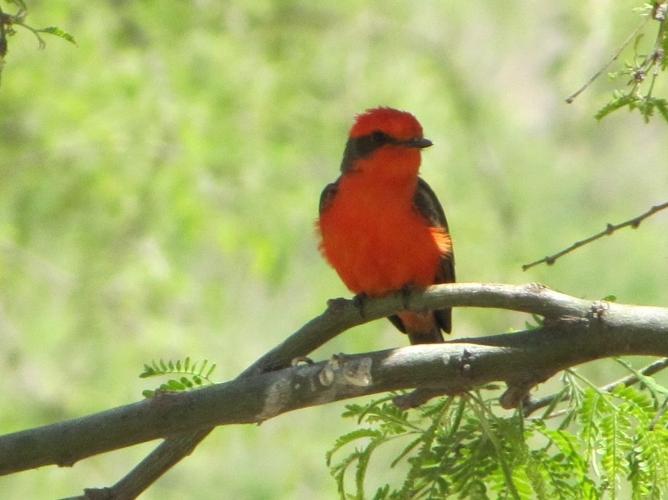 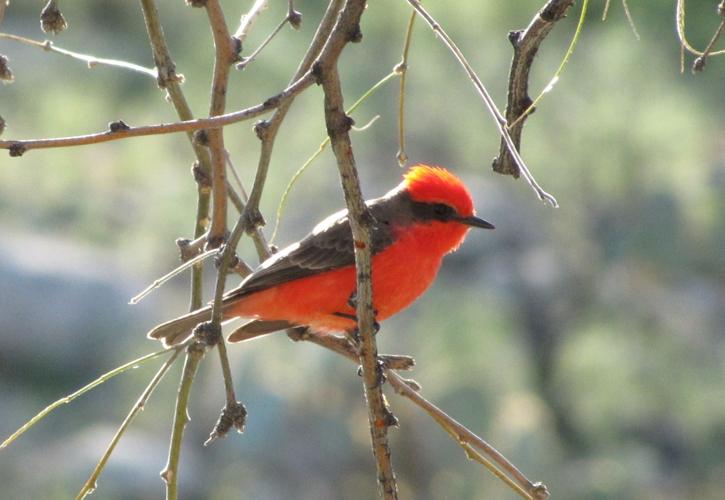 Of all the colorful birds in southeastern Arizona, the one certain to get your attention is the male Vermilion Flycatcher. Perched on a low branch, his brilliant red crown and breast reflecting Arizona sunshine, he looks like a ruby with wings. Paying little attention to observers, he sallies out, grabs an insect on the fly and returns to his perch. Look carefully, and you’ll likely find his mate perched nearby, emulating this fly-catching. Less striking, she’s still a beauty with a pale breast and salmon pink belly. These birds love riparian areas, watercourses and washes, and in SaddleBrooke, you’ve probably seen them on a golf course. Most U.S. Vermilion Flycatchers migrate from Mexico to nest here and in parts of Texas, New Mexico, and California returning south in the fall. Fortunately for us, some winter here as well.

How Many Ways Can You Say Red?

If this bird had been named the ‘Red Flycatcher’, maybe it wouldn’t seem so special. ‘Vermilion’ suggests something more than red, and the dictionary agrees, adding ‘bright’ and ‘orange’. The flycatcher’s scientific name is even more to the point, Pyrocephalus rubinus, which translates as ‘ruby fire head’. Read Herbert Brandt’s five-pound, 61-year old classic, Arizona and Its Bird Life, and you will find poetic references to the Vermilion Flycatcher on 27 different pages. Brandt waxed eloquently about the Firebird, as it was also known, describing it as brilliant, a jewel, crimson, blazing, fiery, rich ruby, colorful, a gem, and a gorgeous flame. I think he liked it.

The Vermilion is the only species in its genus, Pyrocephalus, and is unique among other Tyrant flycatchers in a couple of ways. While male and female flycatchers, such as Black Phoebe, Ash-throated Flycatcher, and Western Kingbird look alike, Vermilion males and females are strikingly different. Likewise, young phoebes, Ash-throats, and kingbirds look much like their parents, but immature Vermilion males are mottled, not solid red and females have yellow bellies, not pink. One feature common to young and adult Vermilions is a dark eye mask that aids in identifying immature birds. Vermilion Flycatchers also dip their tails like phoebes, and the females can be confused with the similar looking, but larger (and more common to SaddleBrooke) Say’s Phoebe. Vermilions belong to the large family of Tyrant Flycatchers, and while several tyrannids are known for elaborate courtship displays, the Vermilion’s is particularly stunning. The male slowly flutters above the trees, more like a butterfly than a bird, displaying his brilliant red breast and crown, and then flutters back to his low perch. I’ll never forget my first sighting of a male Vermilion, performing this elaborate display along the San Pedro River. I thought I was seeing an exotic bright red butterfly.

When one of our sons saw a Vermilion in SaddleBrooke, he recognized it as his favorite Peruvian bird. Indeed they are found in Peru, where you can also find an unusual melanistic version that is completely black and brown. More like a lump of coal than a ruby. As a matter of fact, the Vermilion, relatively rare in the U.S., is widespread across Mexico, Central America, and South America. Perhaps most surprisingly, the winged ruby can also be seen in the Galapagos Islands. All it takes isa six hundred mile flight from Ecuador and a five-figure dent in your IRA. Or you can walk a SaddleBrooke golf course.

If you have questions or comments about SaddleBrooke’s birds, or to receive emailed information about bird walks led by Bob and Prudy, call 825-9895 or email bobandpru@aol.com. Previously published articles can be found at www.birdingthebrookeandbeyond.com.

Keep up with the latest scores and more with our high school sports newsletter!