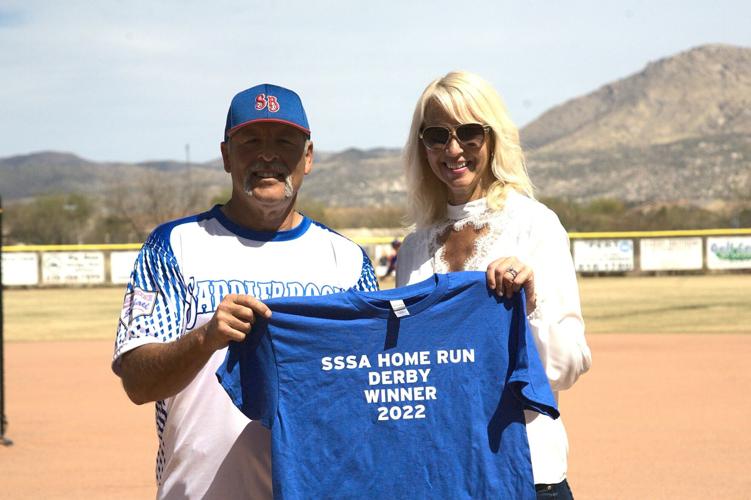 It was a great day for the Irish and everyone else involved in SaddleBrooke Senior Softball’s annual St. Patrick’s Day Tournament at the community's gem of a ball field.

The large crowd featuring players’ families, friends, neighbors and grandchildren, was treated to free food, lively music, entertaining commentary and exciting games. The crowd was enthusiastic, cheering the good plays and groaning on the not-so-good ones.

The wearing of the green was everywhere. Many of the spectators and players got their Irish on with festive green attire. Irish eyes were indeed smiling.

There wasn’t any corned beef and cabbage, shepherd’s pie or Irish soda bread but there was plenty of free hot dogs, brats, cookies, chips, soda and water. As usual, Doug Wagers from sponsor Window Wizard did the cooking. Dr. Helen Jia, DDS, was the new tournament sponsor.

The tournament featured four games by the lads and lassies who play in the league’s winter season and a first-ever home-run derby.

The first game included Community League players. The visiting team won 25-16 as shortstop Sue O’Donnell, fittingly in green, dazzled the crowd with outstanding defensive plays. There was no luck involved.

The third game featured Recreation League and Sidewinder League players. The home team won 25-15. The game included some good defense and solid hitting by all the players.

The final game pitted Competitive League players against each. Brothers, Steve and Lynn Laureys managed the teams. Steve’s team won 23-15 in spite of a home run by Lynn. Scott Lundren also homered for the winning team.

Perhaps the highlight of the day was the league’s first home-run competition. Seven players competed, each getting 10 swings. Greg Stroud won, hitting seven over the fence, 300-feet away. Lundren and Steve Jackson tied for second with three home runs each.

Throughout the games, public address announcer King Mitchell provided lively, entertaining play-by-play and good-natured ribbing. He gave nicknames to players, offered unheeded advice and made sure to highlight miscues.

Disc jockey Leroy Johnson played an eclectic mix of music ranging from Irish songs to old favorites like the Beach Boys and contemporary artists like Beyonce, adding to the festive atmosphere.

“It was a fun day for all involved,” said Jessica Passoni, tournament director. “We had a great turnout once again from the community and our players got a chance to display their athletic skills in front of neighbors and friends. Everyone was a little bit Irish today.”

The tournament is one of four holiday events conducted every year. The next one is Memorial Day. SaddleBrooke Senior Softball plays year-round Monday through Friday in five different leagues based on ability. The spring season starts early May.

Keep up with the latest scores and more with our high school sports newsletter!