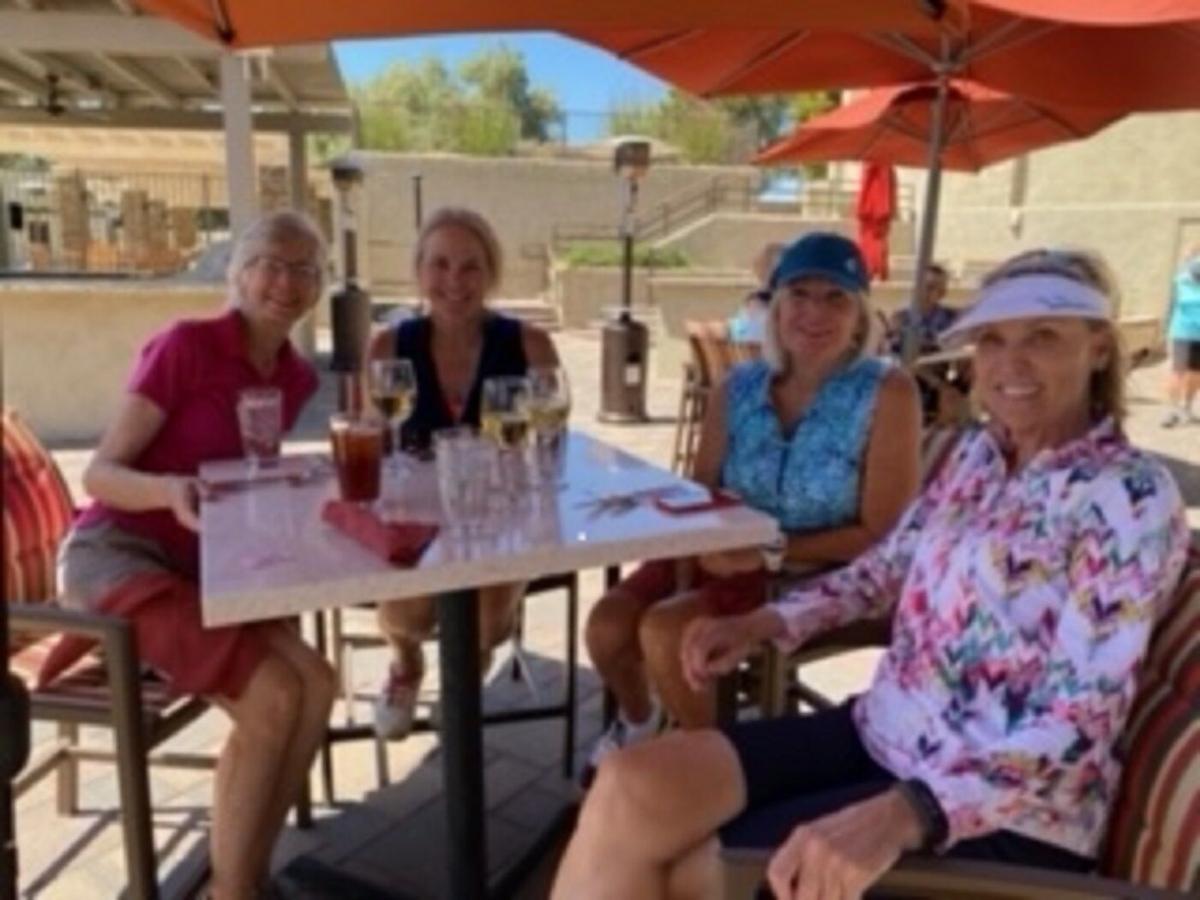 A table of winners at Member/Member Luncheon. 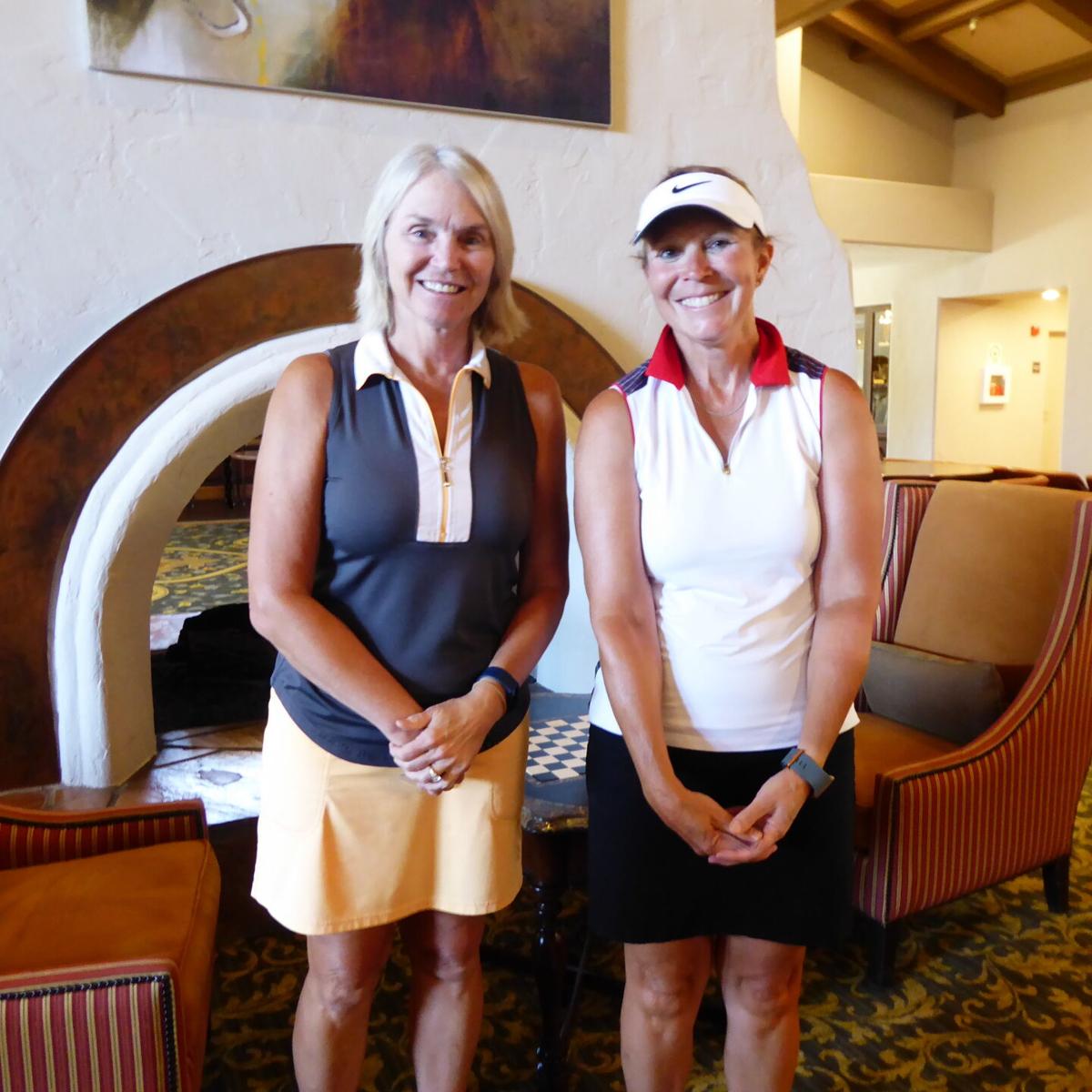 A table of winners at Member/Member Luncheon.

Scrambles in golf involve teams of four playing their own ball. They choose the most advantageous ball position from the four tee shots and then, everyone hits their second shot from that position. And so on, until the first ball finds the bottom of the cup. Scrambles are also word games. Letters of the intended word are jumbled up for the reader to decipher. The first letter of each paragraph below should be unscrambled for the name of a current LPGA professional. Solve the puzzle before looking at the answer given at the end.

Last month, on Monday, April 12 and Tuesday, April 13, the inaugural Member/Member Eclectic Tournament got off the starting blocks with a bang. Run by Nancy Sartor, Sharon Kreutzen and Cathe Kropp, this fun event rewarded two-person teams who, on the second day eclectic, bettered their first day best net scores. If the first day net score was the better of the two, they had the option of choosing that. The combination of their best net scores for both days resulted in their total scores.

Overall First Gross was won by Helen Graham and Mary Ribacchi with a gross score of 65. Overall First Net winners were Judy Melo and Brenda Brown with a net score of 52.

Kachina Dolls travelled to the Tucson City course Dell Urich on April 26 for the outing hosted by SBWGA-18. Twenty-one players were sent by SBWGA-18 and the Niner’s. The latter’s members Sheryl Nugent and Sandy Wagoner were part of the 4th place winning foursome.

Rain on Tuesday, April 27 swept through Nassau— the game, that is— and, for most players, it wiped out nine holes of their round. Lowest net scores for the front 9, the back 9 and for the total 18 holes took home the prizes. Only the first three flights completed 18 holes. The winners in Flight 1 were: Ann Chatham, front 33; Helen Graham, back 35; Deb Finn, total 67. Flight 2 winners were: Judy Briney, front 35; Lynn Stewart, back 36; Margie Buhler, total 73. Flight 3 winners were: Joan Chyall, front 36; Debra Sherman and Sarah Earnest tied on the back 40; Maggie Falconer, total 75. Flight 4 winners were: Mary Floerke, front 38, and Kathy DeMerritt, back 33. Flight 5 winners were: Barb Katz, front 33, and Eleanor Kehlenbeck, back 36. Flight 6 winners were: Judy Schilling, front 35, and, tied for back at 38, Marcia Keim and Sandy Collins.

Yvonne Lecornu took Closest to the Pin on SaddleBrooke No. 6 when her tee shot rolled to 13-feet, 7-inches to the hole. Ridgeview Therapy sponsored the award.

Net and gross scores did not decide the outcome of the game on Tuesday, May 4. The most Stableford points accumulated by a two-person team determined the winners. Points were given in the following manner: 1 for a bogey, 2 for a par, 3 for a birdie and 4 for an eagle. Winners in the various flights were: Flight 1- 1st Kay Kunze /Deb Ousley, 44; 2nd Brenda Brown/Nan Kartonis, 43; a tie for 3rd at 41 between Takeyo Eakin/Becky Hubbard and Deb Finn/Molly Fullerton; Flight 2 – 1st Kay Cruise/Kathy Minx, 48; 2nd Audrey Costello/Maggie Falconer, 45; a tie for 3rd at 42 between Pam Bicknell/Marsha Camp and Gail Fosmire/Geri Sandilands; Flight 3 – 1st Kathy DeMerritt/Ann Running, 45; 2nd Linda Burnham/Darlene Warner, 43; 3rd Dede Crowder/ Mary Floerke, 42; Flight 4 – a tie for 1st at 41 between Cathe Kropp/Nancy Wyllie and Jan Bukes/Barbara Turriff; a tie for 3rd at 40 between Sandy Collins/Kerry Wolfe and Barb Katz/Kay McCollom. Another General Meeting and luncheon followed the May 4 Stableford partners day. Could this possibly a trend for the future? Here’s to resuming in-person social activities within the league, while still observing necessary precautions for everyone’s health and safety.

Long Realtor, Kathy Minx, sponsored the Closest to the Pin award on Tucson #2 for Tuesday, May 4. Not only does she play well, but she must like to take her money home, for she won her own award. Greenies on Catalina #6 were won by Judy Schilling, Kay Kunze and Mary Ribacchi. Congratulations to all the winners in April and early May, who scrambled to win and evidently solved the puzzle of how to win on a Tuesday on the SaddleBrooke golf courses. And how about our readers? Did you solve the article’s puzzle as well?

Answer to the scramble: