Back to homepage
Subscriber Login
Keep reading with a digital access subscription.
Subscribe now
You have permission to edit this article.
Edit
Home
E-Newspaper
Letters to the Editor
Events Calendar
Billboards & Classifieds
Recipes
Current Advertisers
Submissions
Advertise with us
About SaddleBag Notes
Share This
1 of 3 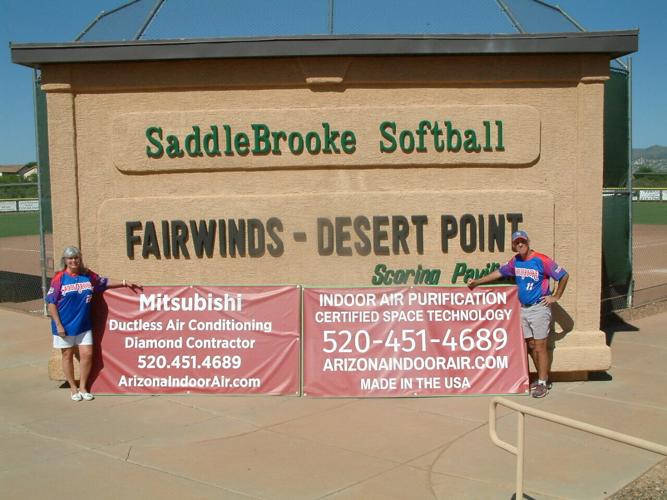 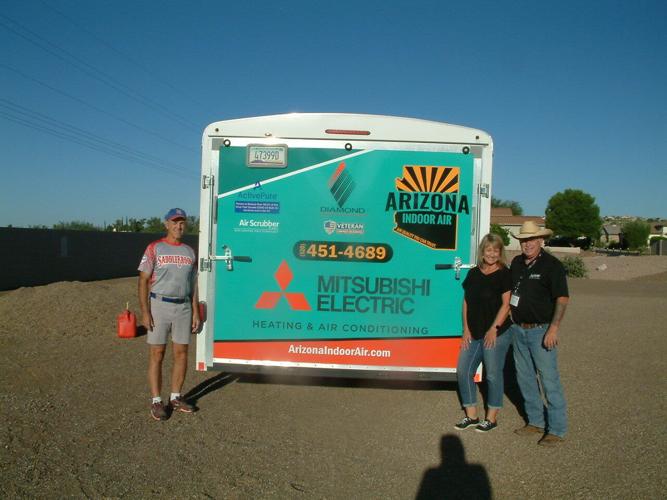 Well, softball fans, the big news is our Labor Day Tournament which took place Monday September 5. Sponsored by ARIZONA INDOOR AIR overall with the grillin’ again by WINDOW WIZARDS. Hope a few of you folks had a chance to come on down for some softball action and maybe drift over to Gary’s HVAC and AIR SCRUBBER display trailer. He and Pam had a raffle going on and I heard that one of our fans won an indoor air-scrubber! Thanks again, ARIZONA INDOOR AIR and Gary and Pam Spencer.

We had four games beginning at 8 a.m. and ending with a 12:30 p.m. game. Whew! That’s a lotta talkin’ for yours truly, who, besides being a wordsmith extraordinaire, is the golden voice behind the mic at tourney time. The Tourney started off with Recreation/Sidewinder, sponsored by Shifren Physical Therapy and Shelves That Slide. Shelves came out on top in a non-stop action barn-burner 17 to 14. I had to slam a coupla lozenges (no, just the regular kind). Then in the 9:30 a.m. game, the first Community (AAA/Coyote (65+)) game, Ridgeview Physical Therapy took on Rancheros Market with Ridgeview coming out the solid winner 20-12. In the second Comm-Coy game at 11 a.m., SB Remodeling did a little derriere-kicking on SaddleBrooke Pet Rescue/Bill Wescoe (sorry Bill) 27 to 16. Your guys and gals got their little behinds paddled. Well, sometimes you’re the bug.

Then came LUNCH! Yeah, baby, that’s what we’re talkin’ about! Our volunteers started dishin’ dogs, brats, kraut, chips, cookies and sodas and waters to one n’ all. Jeez, I had to slip the maitre d’ a coupla fins just to get in there and back to the booth so “my” fans wouldn’t miss any sparkling patter. Please, no autographs! Luckily, my booth mate for several years now, DJ Leroy Johnson, our resident “tunes master,” kept the platters spinnin’. Thanks Leroy! Then in the 12:30 p.m. Competitive (majors) game, we had another barn-burner with Pride Mechanical squeakin’ one out over Player’s Pub, 25 to 24. By then, it was about three o’clock, which is way past naptime, so we cleaned up and headed for our respective recliners. Well, I did anyway. After a quick stop at the garage fridge for a cold one. Ahhhhh! And hey! Special thanks to Evelyn Longo for stepping in as tournament/events director while Jessica Passoni and her husband Joey Softball were globe trotting.

Meanwhile ... Here’s a brain teaser for you. Just recently in a game, we had a long fly ball, I mean this sucker is about to go into orbit and it comes down just inside the fence and … tips off the outfielder’s glove, clanks him (I mean really bonks him) on the top of the head, and ricochets over the fence! Ruling? No, I’m not telling ya. Later maybe. Speaking of, I remember seeing that happen to Jose Canseco way back when (he wasn’t around for his outfielding skills) and the result and ruling was the same. And speaking of Jose, remember the size of him and McGuire back then! Holy kick-a-poo joy juice! Then they retired and looked the size of Mickey Rooney. Well, that’s what a good diet and weight training regimen can do for you they said (at the time). Well, alright then….. home run is the call. Meanwhile (and more importantly), after the stars and little birdies went away, the fielder was able to get up under his own steam and after an inning or two icing that sucker down, was back in the game. Whew! Nothing but excitement in SB softball, whether you’re on the field or in the stands. I’ll say no more. Well, yes I will. Soon, too.

Told you. Well, it’s Tuesday, September 13 and deadline time for the SB Notes, which you’ll see around the end of the month. The current Summer season ends Friday, September 23, so really just a week ana half to go. Signups are underway for the Fall season, which begins Monday, October 10 and will run thru mid-December. The snow-birds start drifting back around mid-October to November 1, so we should have a full slate of teams and games to fill your ravenous softball appetites.

Meanwhile, regular league softball ACTION! With just over a week to go, the Thursday Coyote League and Friday Community and Competitive have two games to go and all others are down to their final game next week (well the Monday Community doubleheader – a three team league). In Monday Community, Canine and Company has a tenuous 6-4 to 5-4 lead over Community Church of SB, but “the Church” has got the doubleheader week up next while Canine and Coyote Golf Cars (the cellar-dweller) have single games. So, the league trophy is still up for grabs. It all comes down to those games. Yikes! Tuesday Community, though, looks wrapped by Drew’s Barbershop at 5-3, while Dominick’s Italian is 3-5. Sorry Dom. Just the one game left. In Tuesday Competitive DS Builders at 6-2 has been stomping all over Concierge A/C (2-6) all season. Who structured those teams?????? Same thing on Wednesdays with the Sidewinder teams with Golf Cars of AZ at 6-2 and Firetruck Brewing 2-6. Oh well. Bug/windshield, right? Thursday Coyote is still a TIGHT race with Healthy Skin Dermatology at 4-3 and Hardin Bros Automotive at 3-4. So tomorrow’s game and next week are KEY, baby! On Fridays, in Competitive, Jim Click Automotive has wrapped up the league championship at 5-2 over Mend Massage, 2-5, with just two games left. But in Friday Community, the battle’s still raging with two games left. Kristy McInnis-Coldwell Banker Realty leads at 4-3, with Leah Kari-Medicare Solutions close by at 3-4. Anyway, by the time you read this, it’ll all have been decided.

FALL SEASON begins Monday, October 10! And runs thru mid-December. Our VETERAN’S DAY TOURNAMENT is slated for Saturday, November 12!! The place to be, baby! And for more information on SADDLEBROOKE SENIOR SOFTBALL, just drift on down to the ballpark and say hi. Or surf us online at saddlebrookeseniorsoftball.com. Remember, we’re “off” from Saturday, September 24 through Sunday, October 9, but the regular junkies are often down at the field anyway. Hittin’, runnin’, sometimes catchin’, and quite often, just flappin’ their gums. Until next time! And remember, as Yogi said, “Playin’ third ain’t too bad if no one hits to you!