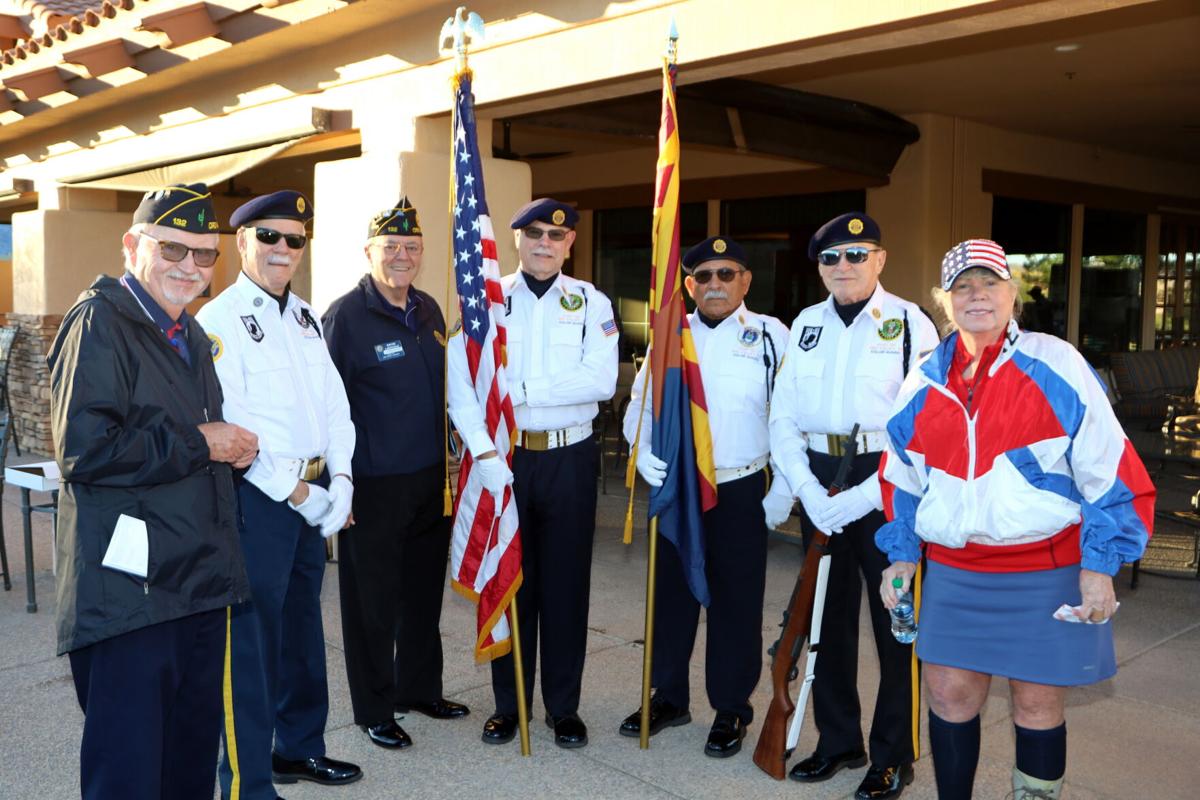 Day one was played at The Preserve, under beautiful, spacious, sunny skies. The group photo displaying our flag spread a stream of country love across the foot of the Catalinas. After receiving golf towels and bags of tees sporting the American flag, the patriotic parade set off to assigned shotgun holes for the four-person team scramble and to enjoy a little golf gallimaufry. On both days, players were granted one “magic putt;” one hole was rearranged to ease the pain, lowering the par; and the number one handicap hole was designated “putt-only,” creating a comical challenge as alternating team members putted using their drivers

Day two at MountainView was, again, a beautiful day, opening with a touching ceremony performed by the American Legion Post 132 Color Guard. Brianna Barnhart, of the local group Manhattan Dolls, sang our national anthem, as proud and solemn comrades placed hands on hearts. The game this day was “Flag Ball.” Team members alternated playing holes with the flag ball, and that player’s score was used as the first of two best net balls. If lost, the flag ball was replaced with an ordinary ball, but if it lasted all 18 holes, two points were deducted from the team’s score. Each player received a cooler lunch box designed in stars and stripes, with the emblem “Dream with US, Celebrate America.”

The teams gathered for celebratory awards luncheons both days in the MountainView Ballroom. The winners, up to four places, were announced, and prizes in the form of Golf Shop credit were distributed. Team “Freedom Ringers” placed first on day one, and “American Made” on day two. Closest to the pin awards were given each day, one to a member and one to a guest, on all par 3 holes. These 16 flag-lovers won magnetized patriotic ball markers. The tables were beautifully decorated with flags and red, white, and blue linins. America-themed music videos played, arranged and orchestrated by Tom Horwedel. When Lee Greenwood’s lyrics “I’m proud to be an American” played, the room burst out in celebratory applause.

Robson Resort Communities sponsors our Member/Guest tournament each year, and we thank them for their continued loyalty and generosity. We appreciate our two born in the U.S.A. bosses from the Golf Shop, Matt Hudson and Mike Karpe, who always take our fun to the limit with their emcee shenanigans. As always, gratitude to Andrea Gray for her photography memorializing our events and good times, and to Steve Lambesis for his contributions to the photo library for this event. Event Chair Loralee Horwedel, born into a military family and as sweet and American as apple pie, awed us with her incredible dedication, energy, and creativity. The heart-felt theme was important to her and the planning team of 10, who persevered for two years in the midst of pandemic turmoil to make this event happen.

We came together as a group of compatriots to honor our county and each other. We left knowing that both individually and collectively, each of us must be a soldier of the flag, our symbol of unity and freedom, so that we can continue to celebrate America.