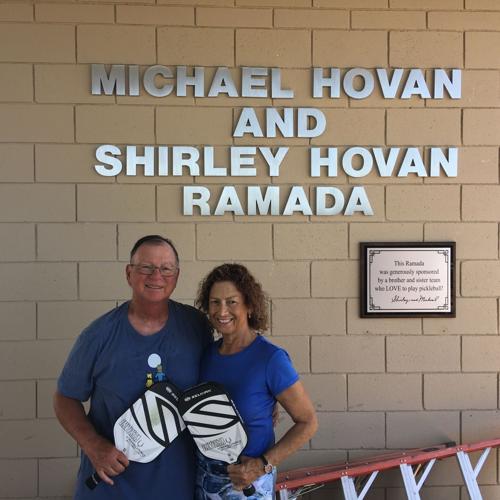 With great appreciation, SaddleBrooke Pickleball Association Inc. (“SPA”) announces that Michael Hovan and Shirley Hovan have made substantial donation for the privilege of sponsoring The Ramada at the new Ridgeview pickleball courts. As shown in the photo Michael and Shirley, brother and sister, stand next to their signage in the new Ramada building.

Michael is a retired anesthesiologist from Akron, Ohio, and Shirley is a retired language arts teacher for middle school and high school in Ohio. A friend of Shirley’s relocated to Tucson for work several years ago. When Michael and Shirley were planning retirement, they decided to visit that friend and investigate relocating to Arizona. They chose Arizona over Florida for retirement and moved to SaddleBrooke six-years-ago.

Although Michael and Shirley were introduced to pickleball after moving here, they actually did not become avid players until the last year or so. Now Michael plays pickleball two to three hours every day. Shirley participates in pickleball twice daily. They also engage in drills, like “skinny singles,” and watching videos. Michael has also competed in tournaments around the state of Arizona.

As the plaque on The Ramada accurately states:

This Ramada was generously sponsored by a brother and sister team who LOVE to play pickleball!

Michael and Shirley’s future plans in pickleball are to improve their skills, challenge themselves and enjoy the sport. Michael also hopes that with more courts, SPA can sponsor tournaments, bringing players from around the state to SaddleBrooke. Michael and Shirley added that they want to thank everyone else who has donated to the expansion of the pickleball courts: buying a brick/paver, sponsoring a bench or a table and monetary donations.

SPA is planning a gala gathering on Friday, November 18, at the MountainView ballroom for SPA members to celebrate the expansion of the pickleball courts.