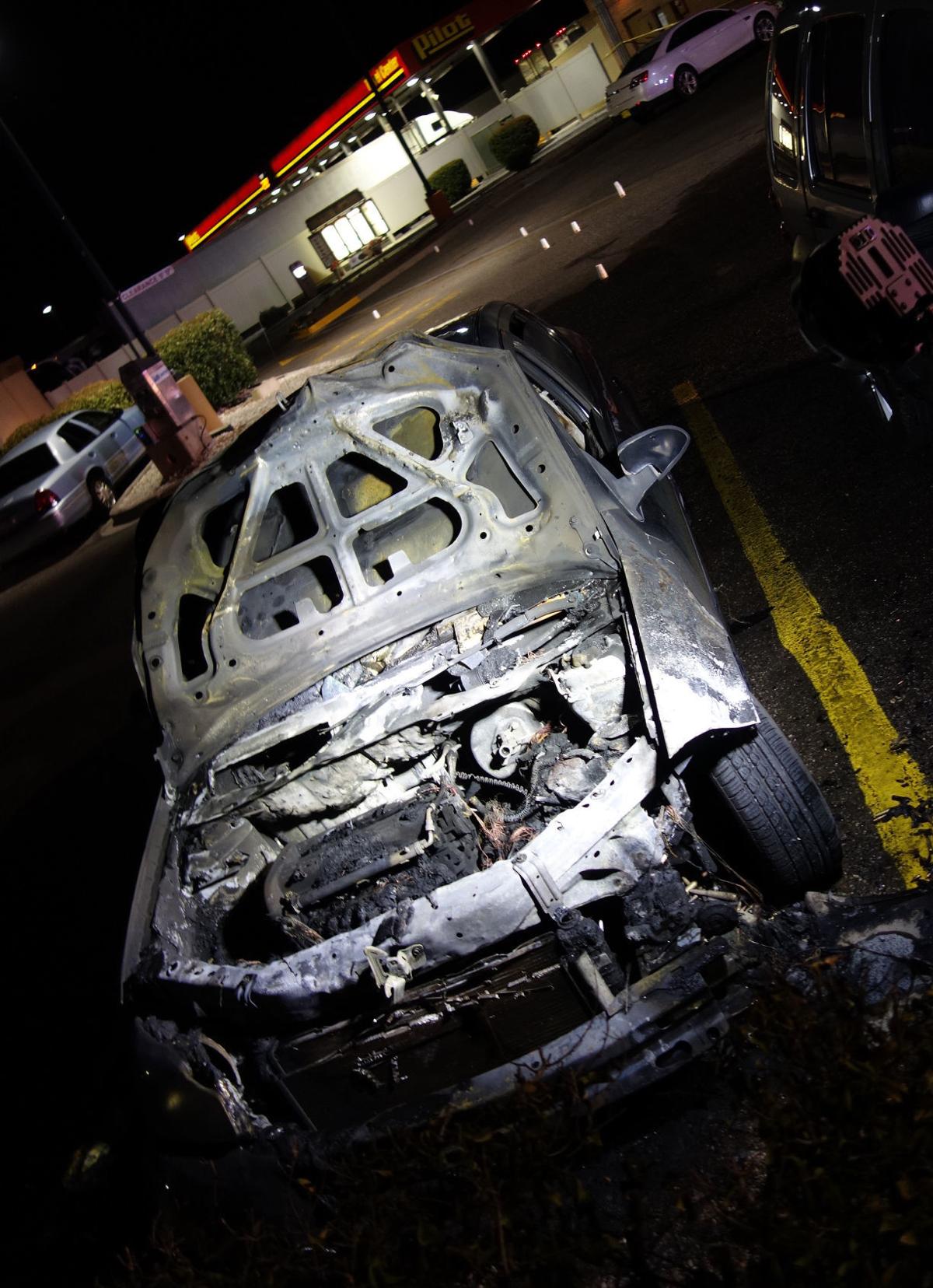 The remains of the car sit illuminated in the Pilot Travel Center parking lot Thursday night. 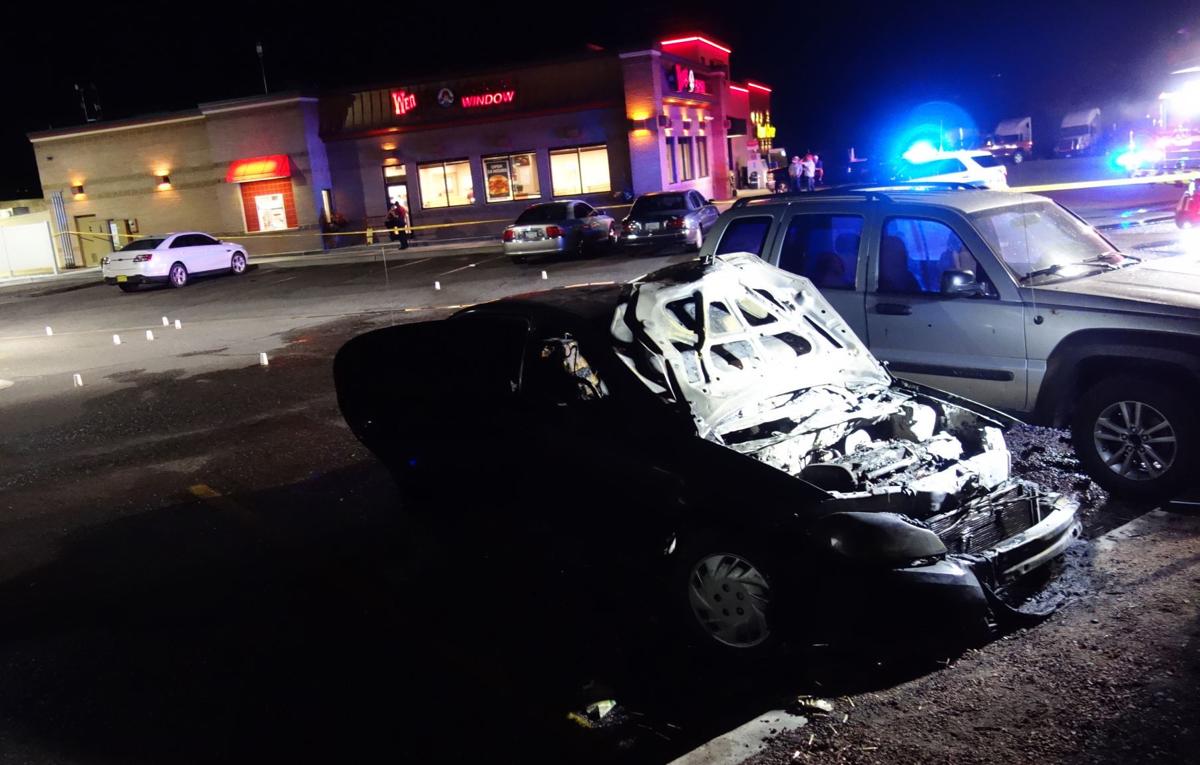 The car was abandoned on the west side of Pilot Travel Center. 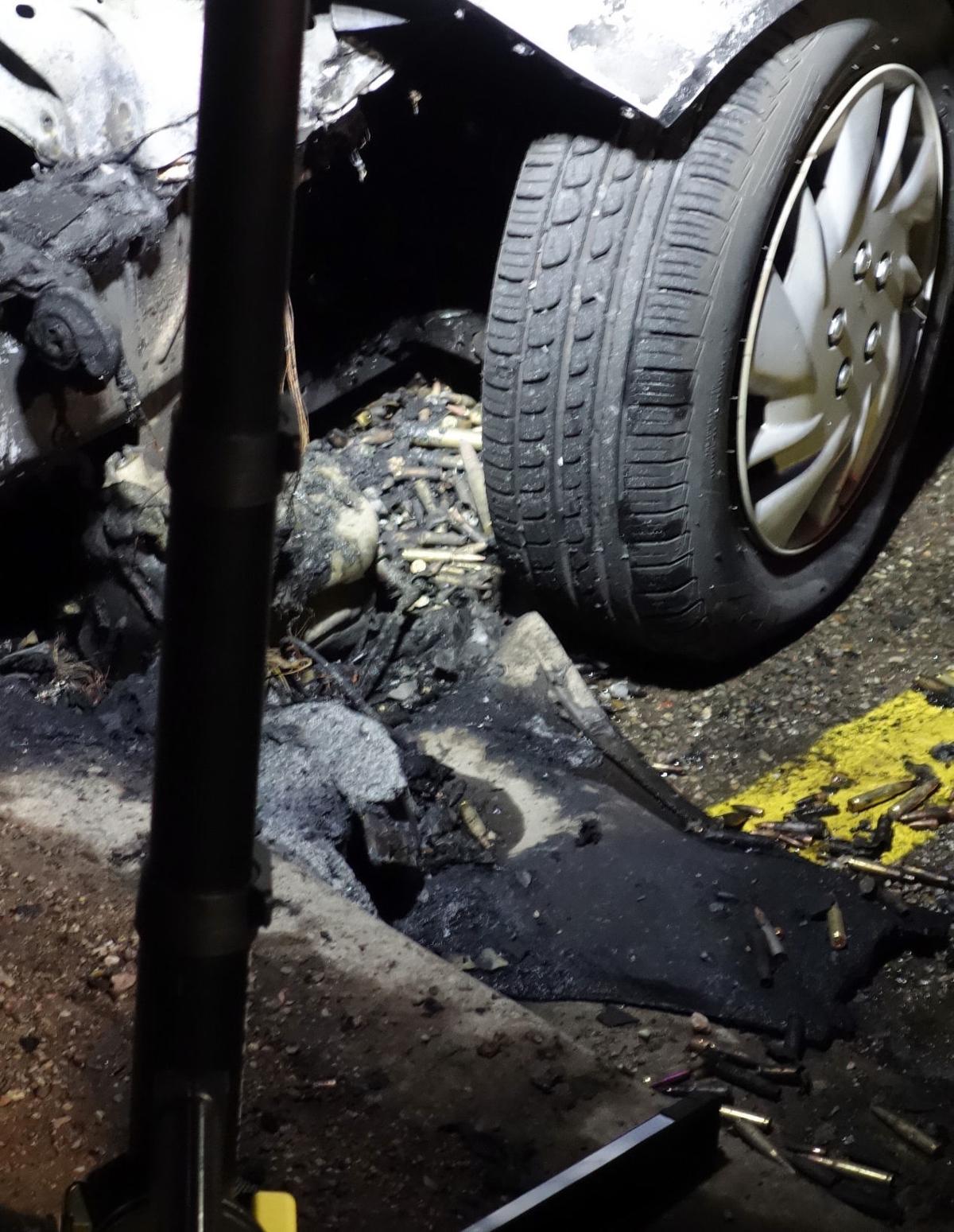 Bullets and casings litter the ground around the vehicle’s front left tire.

The remains of the car sit illuminated in the Pilot Travel Center parking lot Thursday night.

The car was abandoned on the west side of Pilot Travel Center.

Bullets and casings litter the ground around the vehicle’s front left tire.

A failed attempt at smuggling ammunition into Mexico ended with a car engulfed in flames at a truck stop in Rio Rico as bullets hidden under the hood began to explode, newly released reports show.

Francisco Eduardo Santana Lopez, a 19-year-old U.S. citizen, and Aaron Jazziel Cordova were driving to Mexico with more than 4,200 rounds of ammunition hidden around the engine when rounds began exploding on May 31, a criminal complaint filed in U.S. District Court in Tucson by a special agent with Alcohol, Tobacco, Firearms, and Explosives on June 14 shows.

After Santana Lopez and Cordova, neither of whom are licensed arms exporters, left the ammunition retailer and drove toward Mexico, they stopped at a house in Rio Rico where they broke down the ammunition into smaller boxes and placed them under the hood of the car, around the open areas of the engine, a special agent with Homeland Security Investigations wrote in a sworn affidavit filed with a search warrant request.

Once everything was loaded into the vehicle, Santana Lopez, Cordova and an unidentified woman from the house drove back toward Nogales. As they drove down Interstate 19, Santana Lopez heard explosions coming from under the hood of the vehicle, according to the affidavit.

They got off the interstate, parked the car at the Pilot Travel Center in Rio Rico and ran away as the car began to burn and ammunition continued to explode.

Two weeks later, Santana Lopez was stopped at the Nogales port of entry as he tried to return to the United States. He told HSI agents he and Cordova were picked up by an unidentified man near the Rio Rico gas station and taken to Mexico.

Santana Lopez also bought military-grade equipment, including a rifle capable of penetrating armored vehicles, from online retailers and smuggled it to Mexico, the Homeland agent wrote in the affidavit.

On July 11, Santana Lopez and Cordova, whose age and citizenship were not included in court documents, were indicted by a grand jury on charges of attempted ammunition-smuggling and conspiring to smuggle ammunition from the U.S. to Mexico.

From June 2017 to June 2018, Santana Lopez possessed a variety of firearms and firearms equipment that he intended to transport from the U.S. to Mexico, including four M203 grenade barrels, which are designed to attach to a rifle to launch grenades, a Barrett .50- caliber rifle and a parts kit and tripod assembly for a machine gun, according to the indictment.

Drug traffickers use .50-caliber Barrett rifles against Mexican authorities, including an attack in late March in Tamaulipas, Mexico, against a Mexican navy armored truck, according to Mexican media reports.

On July 27, Santana Lopez pleaded not guilty. His trial is set for Sept. 5. His defense lawyer did not respond to a request for comment.

Photos of the border busts in 2018

Check out the photos of some smuggling failures at Arizona's border.