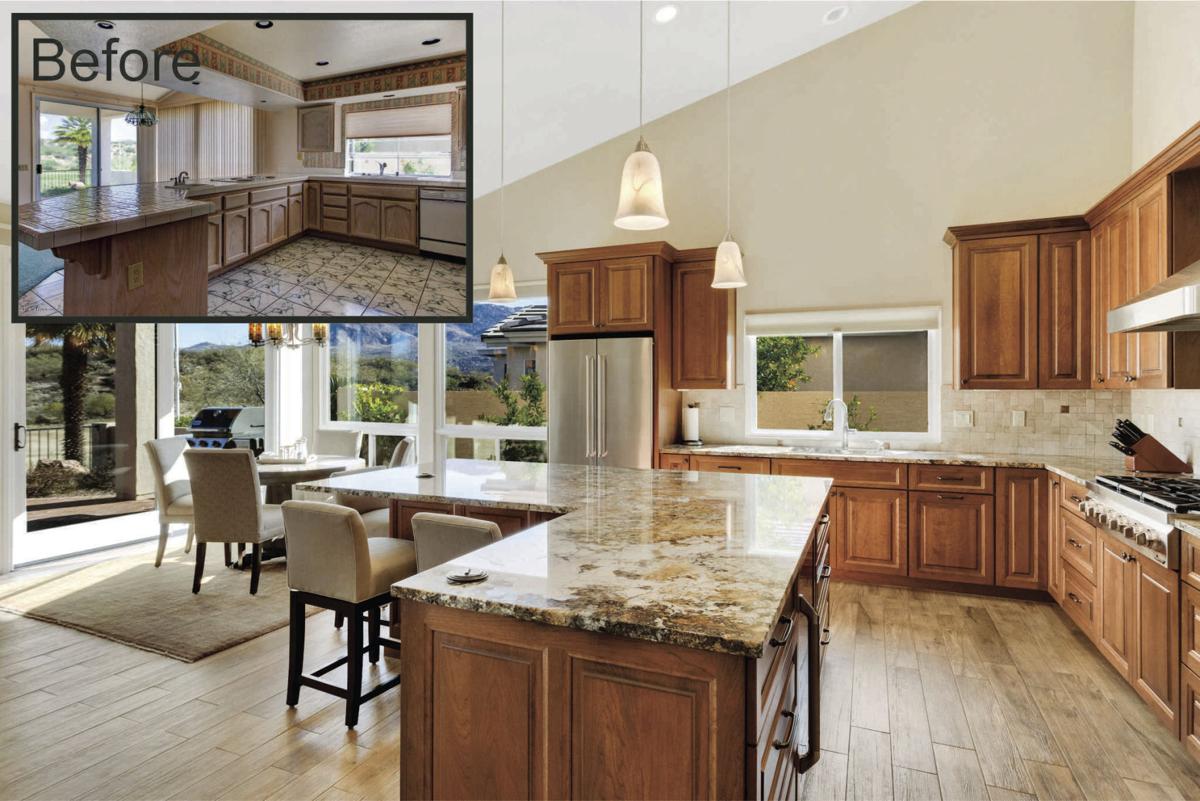 Kitchen. Before inset and after. 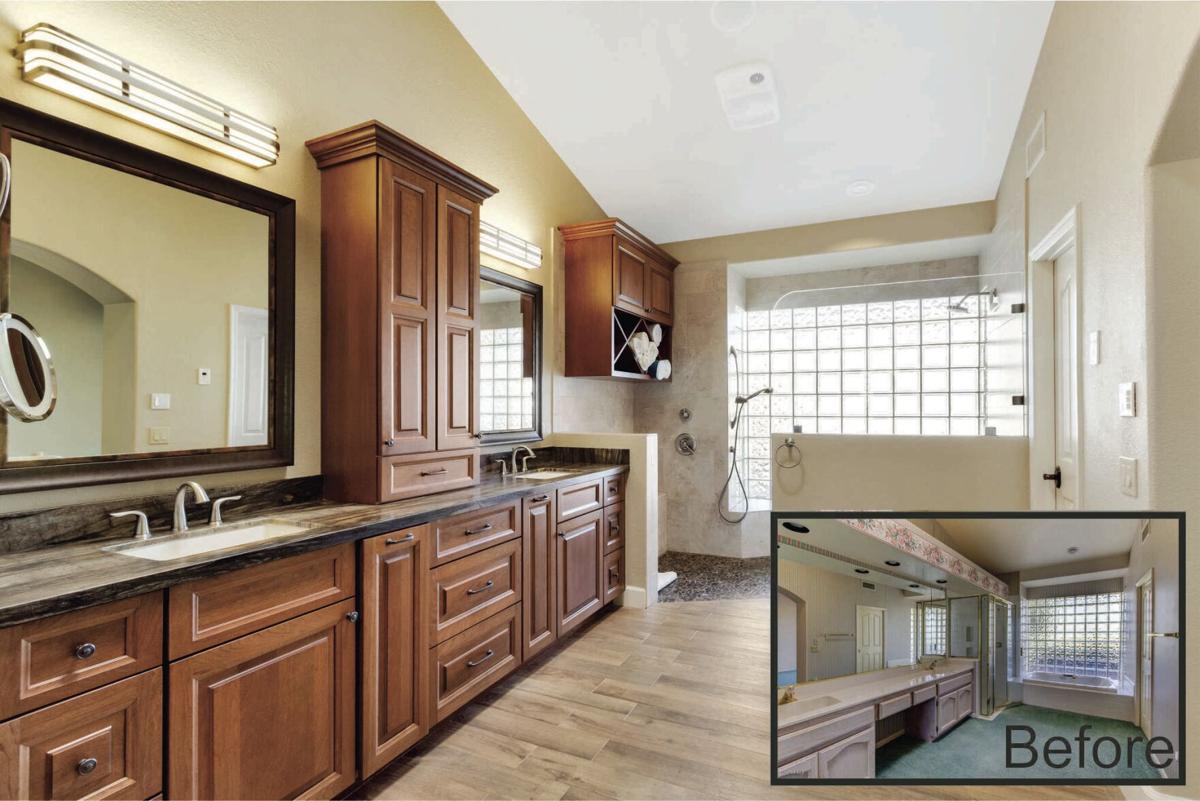 Master Bathroom before inset and after.

Kitchen. Before inset and after.

Master Bathroom before inset and after.

"We want move-in ready," was the Sartors' primary request of their realtor, "No more fixer-uppers!" After several remodels of prior homes, Seattleites Nancy and Richard Sartor had no desire to take on another redo. Yet, they repeatedly found themselves at odds with the interpretations of 'move in ready' the market presented.

While admiring the layout and up-to-date features and finishes of homes in the Preserve and SaddleBrooke Ranch, they found the homes to be either too large or too much of a compromise in lot positioning. They had cultivated a preference for the orientation of a home, along with a relative amount of privacy and mountain view over the lure of a new build.

And so, it happened the Sartors took ownership of a home in January of 2015 that they wouldn't deem move-in ready until full renovation was completed nine-months later. Despite the property’s stunning golf course and mountain views and a couple of price reductions, the 2,691 square-feet Borgata had languished on the market for over a year. Sensing its potential, Nancy and Richard seized the opportunity and settled in for another comprehensive home renovation.

An eighties-era time capsule, the home was resplendent in a common palette of the period with its seafoam green carpeting, peach walls, brass fixtures, and glossy Italian tile with black and verde fissure accents in the kitchen and runway halls. The couple saw the possibilities beyond the dated flooring and the sponge-painted walls and floral wallpaper.

The Sartors chose a general contractor for their remodel project. Smith's own home remodel inspired a primary design decision-the wood-look flooring the couple desired. They selected the same Pier ceramic wood plank in cocoa Smith had used, opting to have it laid wall-to-wall in a staggered pattern, with the smallest grout line possible, to beautifully mimic the real wood the couple enjoyed in their Bellevue home.

To fulfill the Sartors’ desire for "open and casual," Smith’s team removed the archway separating the formal dining room from the living room and entryway and demolished the kitchen soffits and false ceilings in both the kitchen and dining room. The result revealed the soaring spaces of the Borgata's vaulted roofline and improved overall flow. Wallpaper was stripped and walls retextured and painted with a palette of soothing neutrals from Benjamin Moore, including Shaker Beige with Navajo White trim in the Family Room, Dining Room, hallways and baths, Lenox Tan in the Den, Copley Gray in the Master Bedroom and Waynesboro Taupe in the Powder Room.

With the demolition phase underway, the couple reached out Smith's subcontractors to provided design assistance in concert with their Washington-based designer. The Borgata kitchen's former wraparound layout was gutted and replaced with a large L-shaped island, a design that the couple worked out with Canyon Cabinetry and Design, who supplied the handsome Amish-made cherry wood raised panel cabinetry a rich Cinnamon stain. These were topped with Mascarello granite in a bold beautiful mix of browns, vibrant gold and soft cream colors with splashes of black and accented by flecks of silver. The massive island boasts pop-up 'smart outlets' that makes for convenient access for appliance operation.

While the kitchen sink retained its position under the kitchen window, the small sink on the opposing wet bar was removed to make way for pantry cabinetry and a microwave and coffee station with a Brew Express built-in coffee system. A stainless steel, French door refrigerator was positioned on the same wall as the sink, while the opposing run of cabinetry houses two Dacor wall ovens, including a convection steam oven, and a Dacor 6-burner gas cooktop topped with a stainless chimney range hood.

In the master bath, Nancy realized her dream spa bathroom. While the large light-infusing glass block window was retained, the existing garden tub and adjoining shower were demoed to make room for a massive, open walk-in shower with an entry bench and towel storage area, tiled with Rivera flat pebble mosaic flooring. Utilizing the same cabinetry as the kitchen, a central tower cabinet was installed between his and hers sinks atop a stunning Sandalus satin quartzite with a leathered finish that is both handsome and resistant to water spots, fingerprints and smudges.

With both working from home at the time, the couple relied on a home theater company to ensure a plentiful, solid Wi-Fi signal and install several 'smart home' features, including speakers inside and outside the home with music sourced through Spotify.

Nancy shopped extensively online for inspiration for the home's lighting and fixtures and secured price matching locally from Illuminations. She also consulted a glass company for replacement of all of the home's windows and sticky aluminum sliders with Milgard premium fiberglass powder-coated windows with a bark exterior finish and white interior powder-coated finishes. While retaining the home's existing plantations shutters on the front windows, vertical blinds and peach cellular shades were replaced with neutral motorized Hunter Douglas shades.

While the Sartors received great ideas from their contractor, the homeowners provided some in kind. Inspired by the guest ensuites they’d seen in new construction models, Richard and Nancy envisioned walling off the hall entry to the second bath and removing the bedroom’s boxy closet to make room to connect bedroom to bathroom. The bathrooms essential footprint remained, with a beautiful new walk-in shower with a frameless glass panel replacing the former bath/shower combo and the replacement of cabinetry, counters and fixtures, utilizing the same cabinetry and countertop materials as the master bath. A small closet with organizers, perfect for guest usage, was built in the space of the former hall entryway.

Ensuite baths have become increasingly popular for the privacy and proximity they offer, and particularly practical for the Sartors, given the home’s additional half bath. The powder room bath received its own makeover, with a freestanding vanity and another inspired find of the Sartors: a custom framed bath mirror. Utilizing glass from the removal of all three bathroom’s plate glass mirrors, Diane Struse, owner of Frame 56, cut the mirrors to size and custom framed each to suit the décor of each bath.

The Sartors also updated both the home’s fireplaces with new gas log inserts and crystal rocks which reflect a lovely shimmering light when the fireplace is in use. The old hearths were removed and replaced with a floor to ceiling plane of variegated 16' Wildfire Slate from Arizona Tile infused with shades of gray, blue, copper, creme and brown that lend an earthy tapestry of texture to the rooms.

Presently, the home bears little resemblance to its former state. While considered fashionable and elegant when the home was built in 1990, the Borgata's interior architecture and then-trendy finishes had become considerably dated. Nancy and Richard Sartor have accomplished what they set out to do in creating a beautifully updated home, not only comfortable and casual, but classic enough to stand the test of time.

MARK YOUR CALENDAR! SaddleBrooke and SB Ranch residents are invited to the third annual SaddleBrooke Remodeled Home Tour on Saturday, November 13. Due to popular demand, there will be two tours: a morning tour from 9 a.m. to 12 p.m. and an afternoon tour from 1 p.m. to 4 p.m. Proceeds help SaddleBrooke Community Outreach provide food, clothing and educational opportunities for children is local communities. Tickets go on sale Monday, October 11 at 9 a.m. at the SBCO office in Suite L in the Minit Market Plaza.