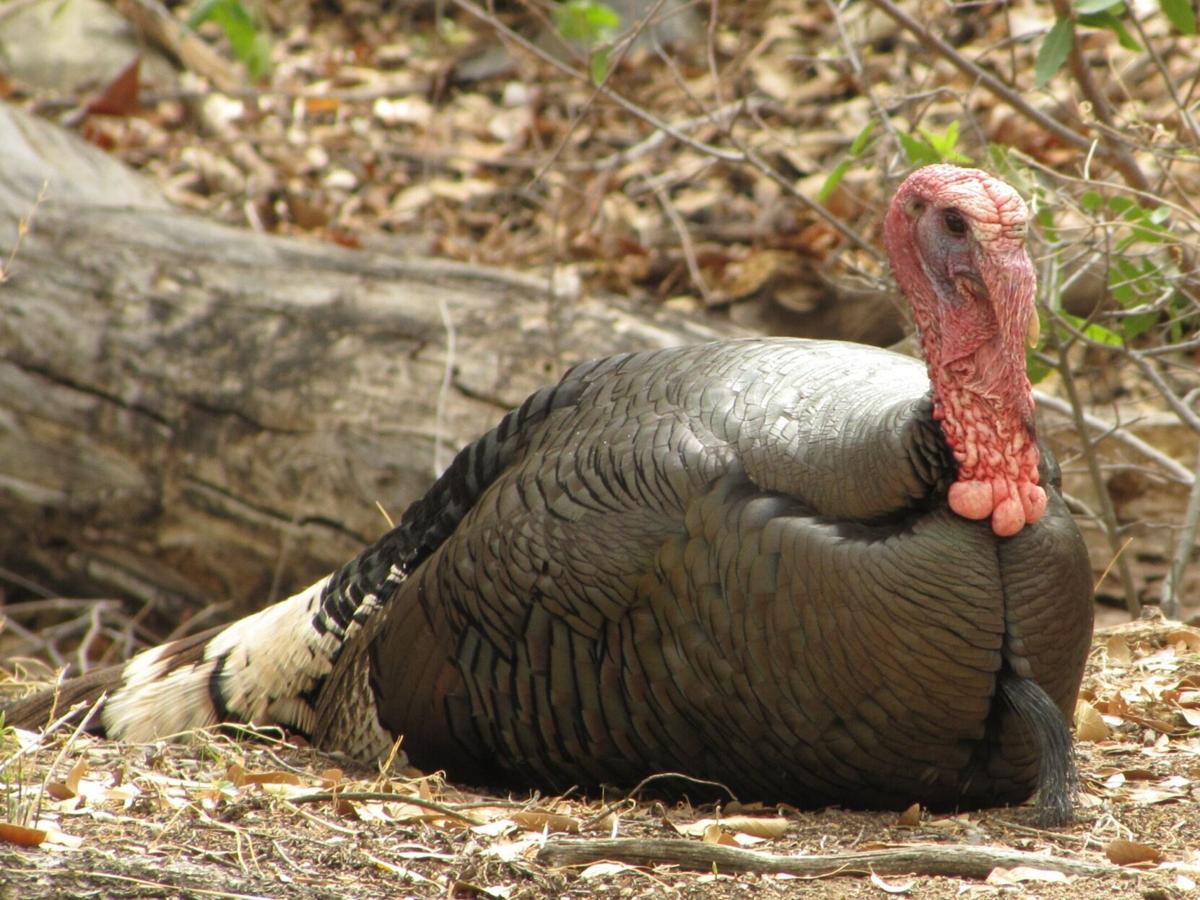 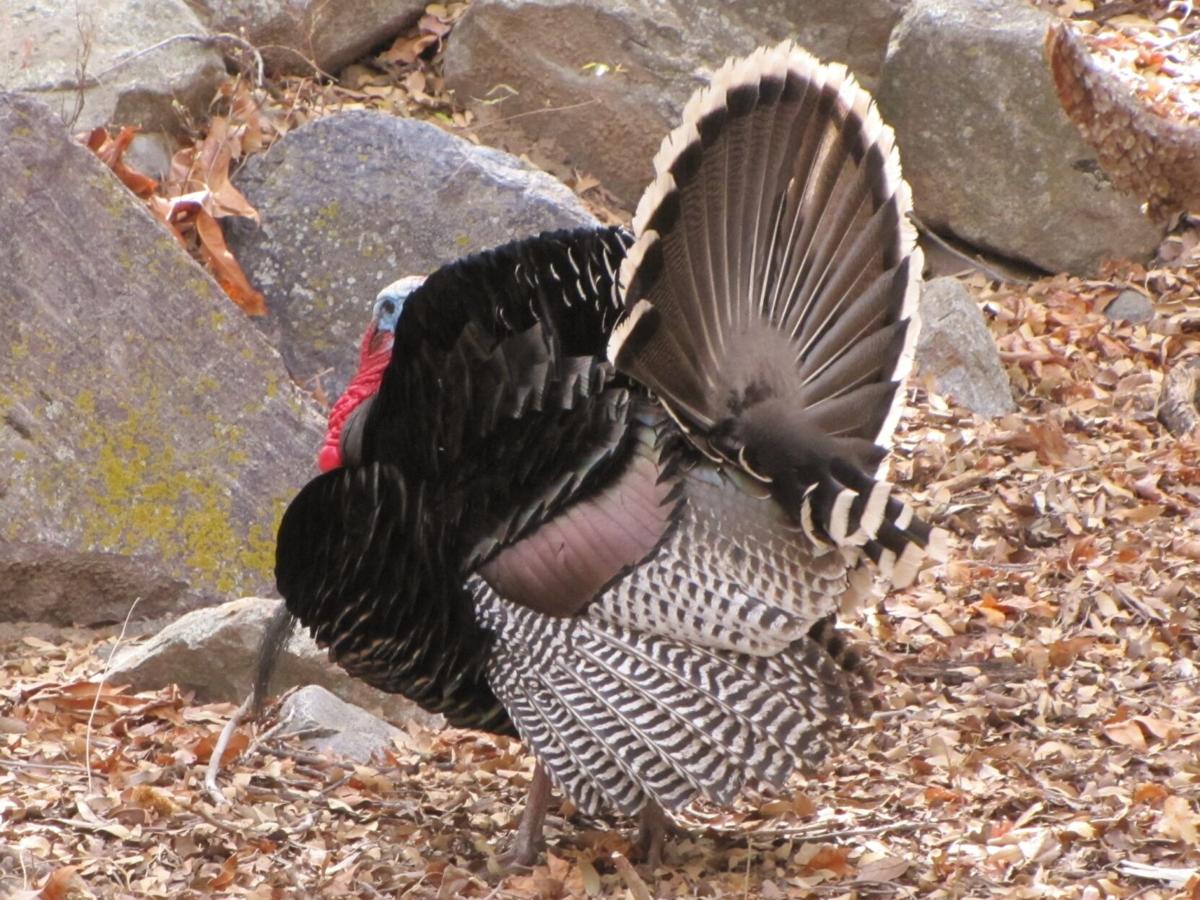 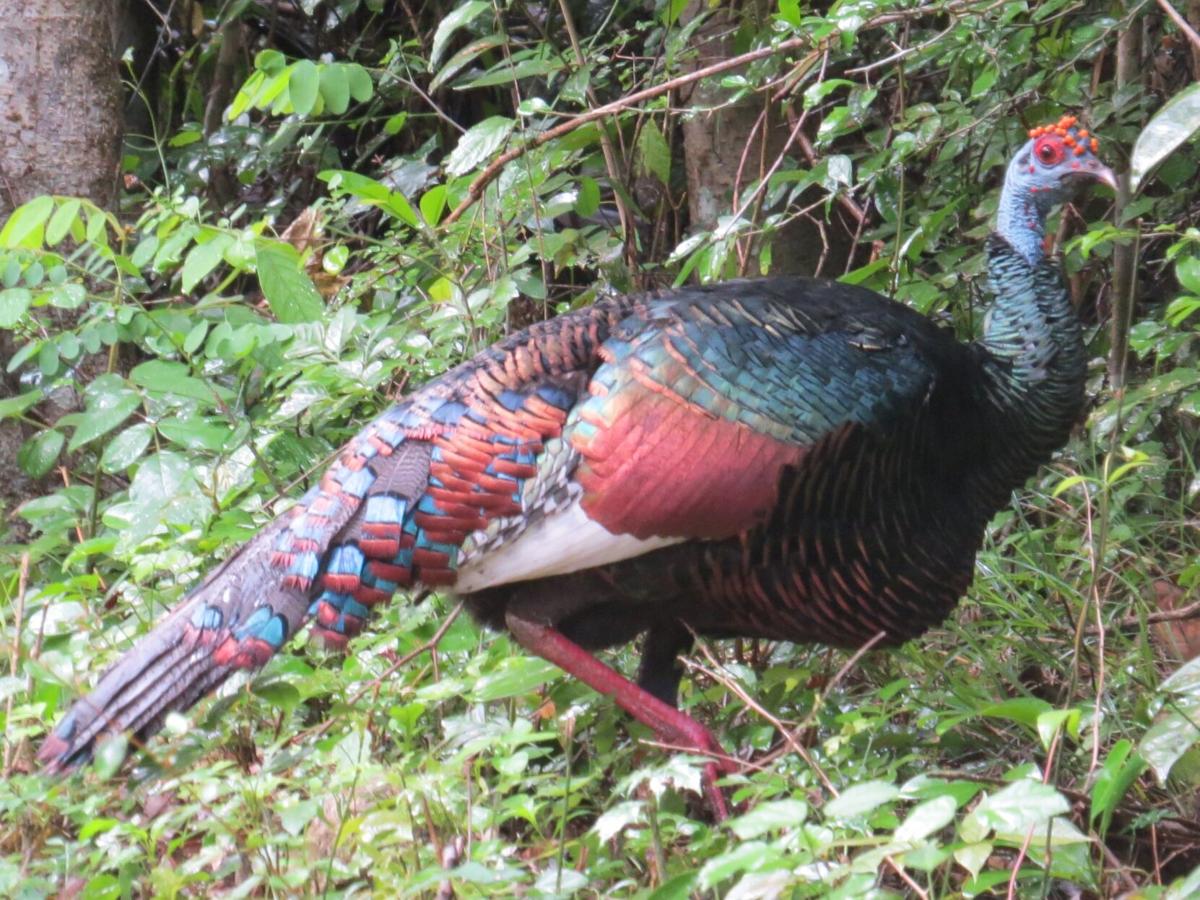 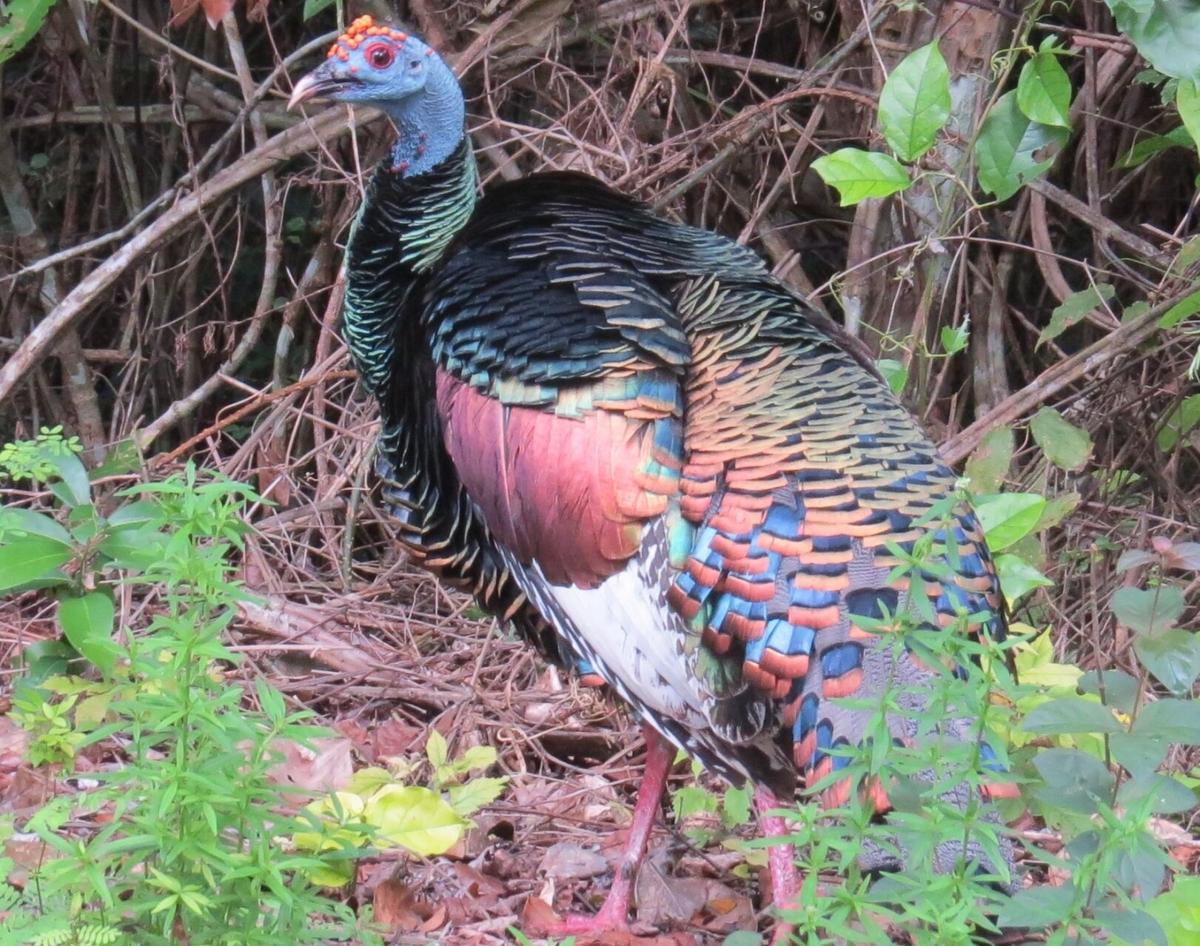 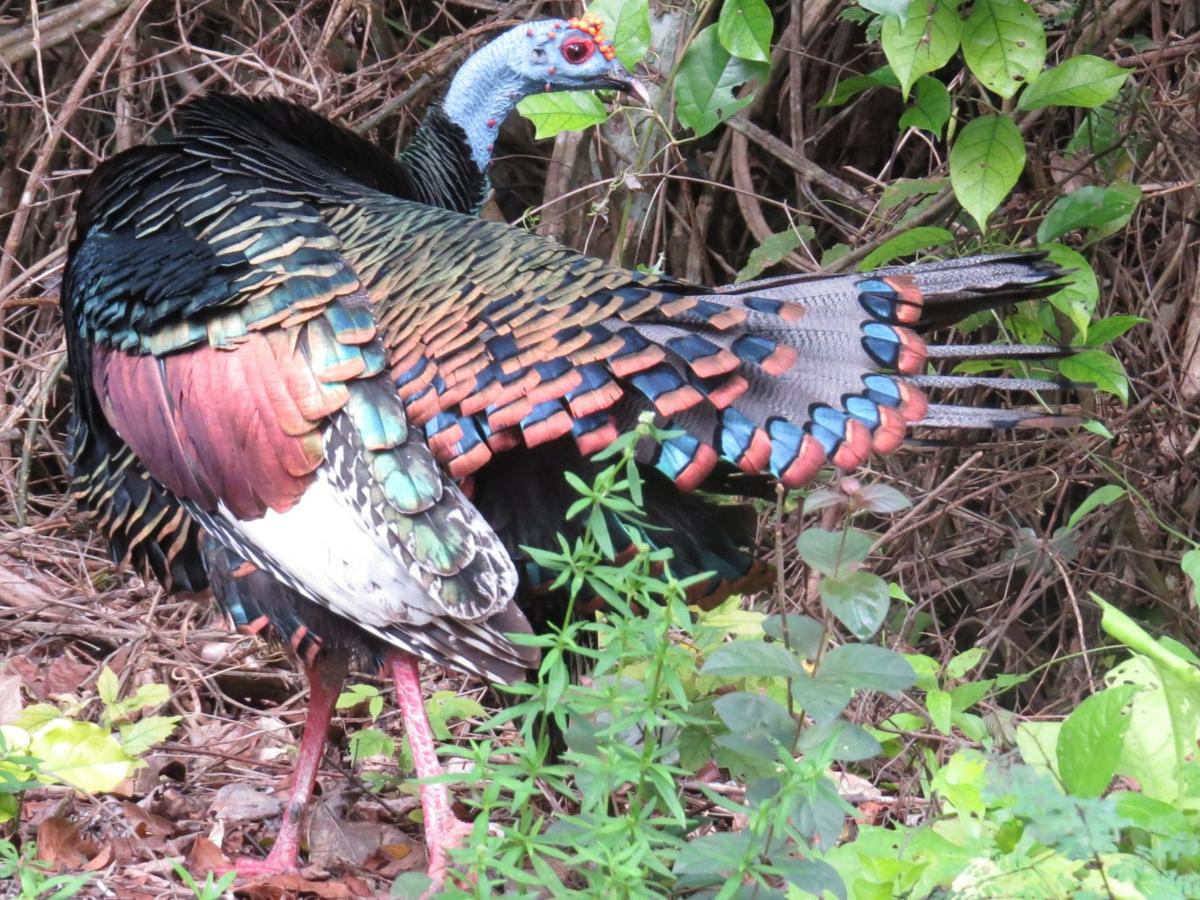 When November rolls around, thoughts turn to Thanksgiving, being thankful and, inevitably, turkeys. Whether turkeys think about our holiday has yet to be proven, and except for the annually pardoned White House bird, domestic turkeys have no reason to be grateful. On the other hand, most of their wild cousins have plenty of reasons to be thankful. Give or take, about six million reasons.

Worldwide, there are two species of turkeys: the Wild Turkey (Meleagris gallopavo) and the Ocellated Turkey (Meleagris ocellata). The species we are most familiar with is the Wild Turkey, a resident of all 50 states, Canada and Mexico, while the Ocellated Turkey’s range is limited to some 50,000 square miles of the Yucatan Peninsula. About the same size as Wild Turkeys (up to four feet in length), the Ocellated species are the trimmer of the two. The males run about 11 pounds (females about seven pounds) compared with 16 and nine pounds for their cousins. In ‘A Guide to the Birds of Mexico and Northern Central America’, Steve Howell’s description of the Ocellated suggests a Halloween witch: ‘horn nail, naked head and upper neck, blue and orange warts and an inflatable forehead wattle hanging over a black bill.’ But then he describes the iridescent plumage, and you realize this is one beautiful bird. In his short write up of the Ocellated Turkey, Howell uses 16 descriptive colors: black, blue, orange, reddish pink, metallic blue-black, blue-green, golden metallic green, burnished copper, dark brown, white, vermiculated grey, violet-blue, flesh, orange-red, metallic sheen and grey-brown. I probably missed a couple.

Our Wild Turkeys are colorful, too, but they’re blown away by the Ocellated. Unfortunately, this sister species to our Wild Turkey is losing ground, figuratively and literally. Precise population numbers are unknown, but habitat loss and subsistence hunting have led to an estimated 50 percent reduction during the last century, perhaps leaving as few as 20,000 breeding adult birds, and it is now considered threatened by Mexico. Fortunately, we got to enjoy these spectacular birds in the Yucatan, spotting a couple in the jungle near the Mayan ruins at Calakmul, 22-miles north of Guatemala.

The Wild Turkey suffered a crisis of its own, due to unregulated hunting. Over-hunting nearly led to extirpation of American turkeys by the 1930s, prompting a desperate attempt by state wildlife agencies to save the bird. First attempts to rescue the turkey consisted of releasing pen-raised birds, but the near-domesticated turkeys couldn’t survive in the wild. This failure was finally reversed 20-years later by capturing wild turkeys in one area for release in other, non-populated locations. Ironically, the biggest boost to the Wild Turkey's recovery came in 1973, with the founding of the National Wild Turkey Foundation (NWTF), established primarily to protect the future of turkey hunting. The NWTF is a nonprofit conservation and hunting organization, and its efforts, together, with that of other state and conservation organizations has proven enormously successful. The number of Wild Turkeys that had recovered to about one million birds by 1973 is now estimated by the NWTF slightly more than six million. On Thanksgiving, the Wild Turkey does in fact have reasons to be thankful.

In Arizona, we have two of the six sub-species of Wild Turkey, merriami (Merriam’s) and Mexicana (Gould’s). Gould’s were a table favorite of miners, and by the time Arizona regulated hunting in 1929, they were non-existent north of Mexico. An active capture and release program is slowly restoring our population of this species, which now numbers about a thousand birds.

Although hunting in Arizona is permitted for both native sub-species, it is strongly restricted and tightly controlled. During two limited seasons in spring and fall, permits for a single bearded male turkey annually are available only by lottery. In addition to being lucky, you need a fat wallet. License and tag fees are ‘just’ $75, but then you need a finely patterned, camouflaged shotgun, ‘quite expensive’ ammunition, and, to maximize success, a guide ($2,200 for a four-day Tucson-based expert). Makes a free-range grocery store bird look like a bargain.