Skip to main content
You have permission to edit this article.
Edit
Home
E-Newspaper
Letters to the Editor
Events Calendar
Billboard & Classified Ads
Recipes
Current Advertisers
Submissions
Advertise with Us
About SaddleBag Notes
Share This
1 of 4 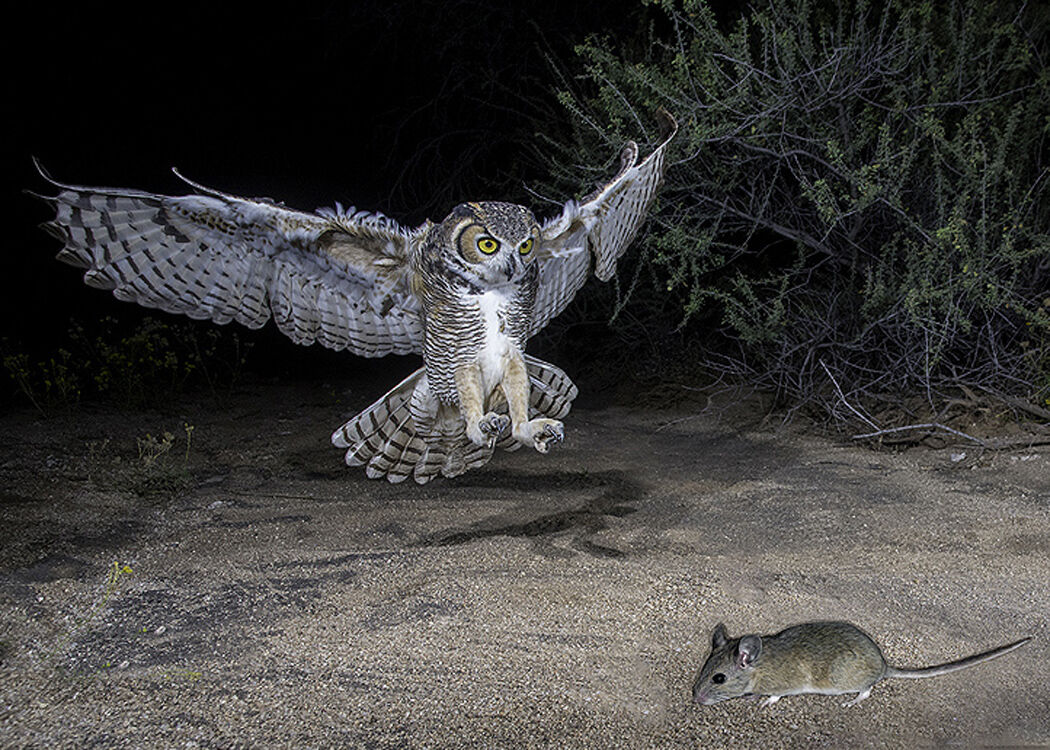 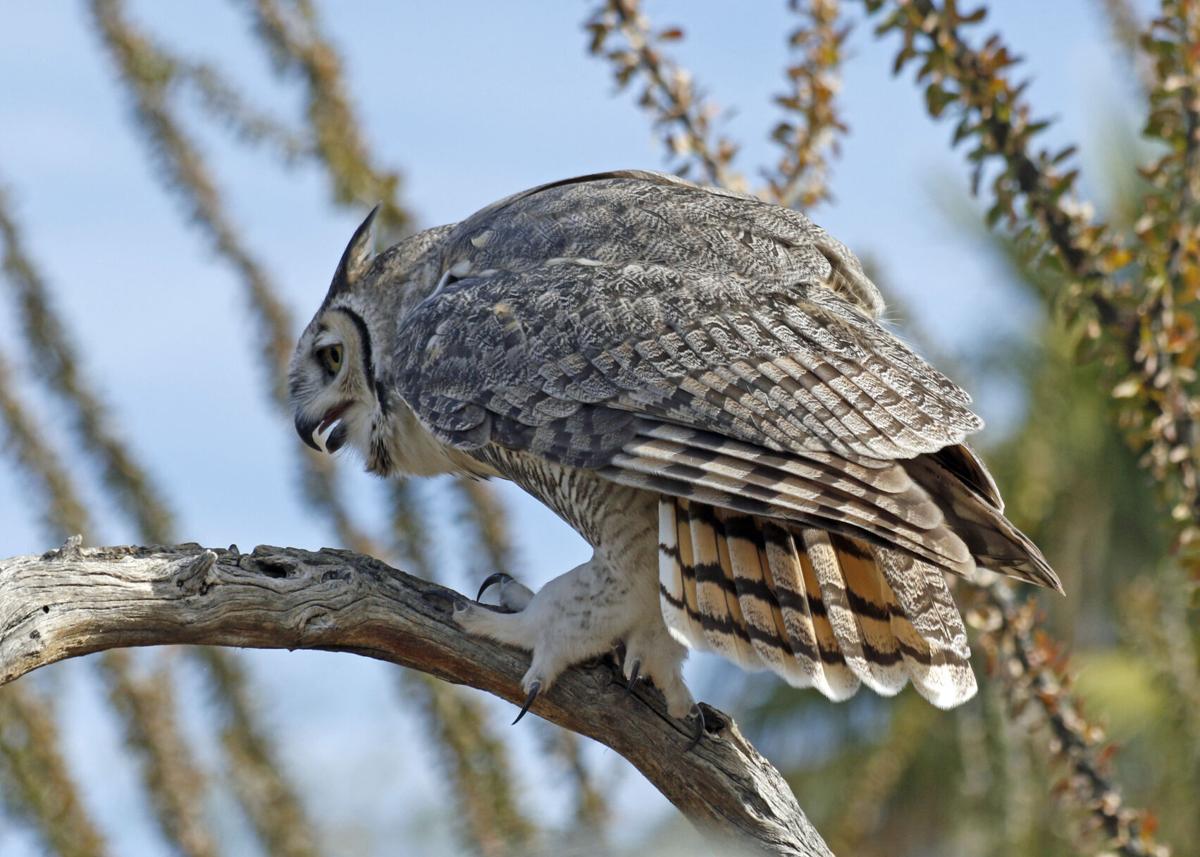 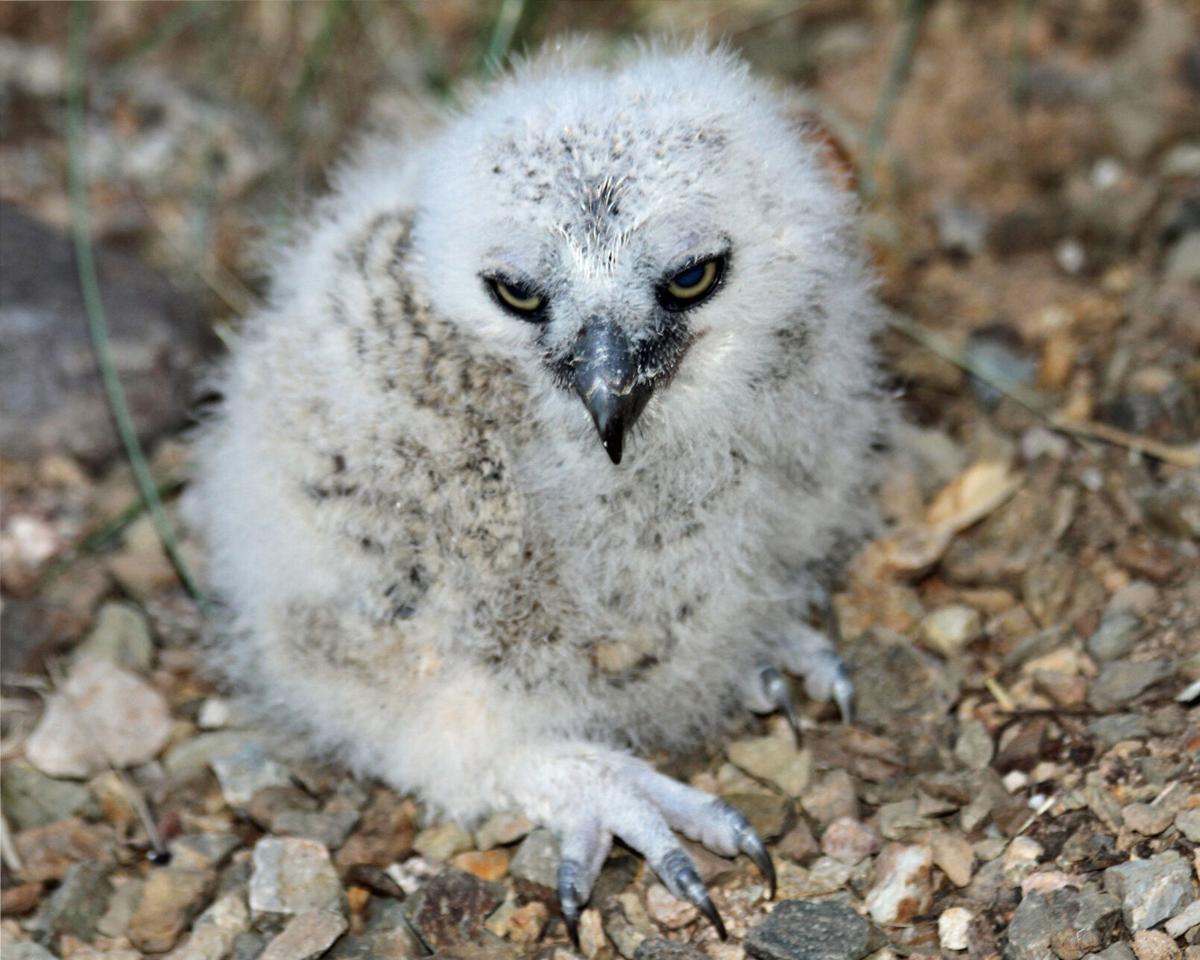 In December, we are wakened just before dawn by the calls of a pair of Great Horned Owls. (Are you up…me too-me too). The males are returning to the territories of their mates. (After the young from the previous year have left the nest and are hunting with the female owl the males are driven off, so as not to compete for food in the breeding territory.)

The low muffled hooting of a Great Horned Owl may carry great distance. Males and females sometimes sing duets, the male calling the well-known pattern of four to five hoots, "whoo, whoo-hoo, whooo, whooo." The female responds with a higher pitched two-syllable call, or six to eight lower pitched hoots, "whoo, whoo-hoo, whoo-oo, whoo-oo." Even though the female Great Horned Owl is larger than her mate, the male has a larger voice box and a deeper voice. Pairs often call together, with audible differences in pitch.

It’s one of the most common owls in North America, equally at home in deserts, wetlands, forests, grasslands and any other semi-open habitat between the Arctic and the tropics.

Using adaptations such as excellent low-light eyesight, hearing, and silent flight to capture prey this powerful predator can take down birds, including raptors such as falcons, hawks, and other owls.

Great Horned Owls are most active just after sundown and then again, just before dawn. Other species of owls take advantage of the time in between to hunt since they have less chance of becoming the Great Horned Owl’s dinner.

After spotting their prey from a perch, they pursue it on the wing. Great Horned Owls kill more prey than they can eat; they cache the remains for later use.

A great horned owl can close its feet with 500 pounds per square inch, or psi. The average human exerts—squeezing as hard as we can—80 to 150 psi. The owls use this deadly grip to sever the spine of large prey such as rabbits, pack rats and even skunks. However, the story that owls will eat your dogs or cats is an urban legend; an owl can only lift around its own body weight (2-3 lbs) and owls are found throughout urban areas. While we won’t say it 'never' happens, it certainly doesn't happen with frequency. Owls will dive at cats, dogs and even people if they have a nest in the area, sometimes misconstrued as a hunting attempt.

Great Horned Owls are covered in extremely soft feathers that insulate them against the cold winter weather and help them fly very quietly in pursuit of prey. Their short, wide wings allow them to maneuver among the trees of the forest.

Great Horned Owls have large eyes, pupils that open widely in the dark, and retinas containing many rod cells for excellent night vision. Their eyes don’t move in their sockets, but they can swivel their heads 270 degrees to look in any direction. They also have sensitive hearing. They can hear small critters moving through grass from 200 feet.

They are not known for their nest building skills; in fact, they usually take over an old nest from a hawk or other large bird. Nests often consist of sticks and vary widely in size, depending on which species originally built the nest (usually Red-tailed Hawks, other hawk species). Great Horned Owls roost in trees, snags, thick brush, cavities, ledges and human-made structures. Mated pairs are monogamous and defend their territories with vigorous hooting. Owls respond to intruders and other threats with bill-clapping, hisses, screams, and guttural noises, eventually spreading their wings and striking with their feet if the threat escalates.

Although the nestlings are unable to fly for ten to twelve weeks, they begin venturing out onto nearby branches after about six weeks. Fledglings remain dependent on their parents for food until fall.

When I was teaching science a favorite lab activity was dissecting owl pellets. Owls eat their prey whole but cannot digest the fur, feather or bones. They periodically cough up pellets containing the undigested bits of their meal. In class, the children picked out the bones from the pellet and worked at identifying what the meal had been. Even today I can’t resist examining owl pellets. If you find one, give me a call and we will have some fun!

Just a reminder – Please do not use poison bait for rats and mice! In spite of some of your pest control company’s wishful claims: they still kill hawks, owls, coyotes, bobcats and other predators from secondary poisoning.

Of course we all are aware of the challenges we are now facing with the COVID-19 pandemic. Our program at Catalina State Park has been shut down until the situation is resolved. However, if you have visitors, we will be happy to arrange private tours for small groups to our facilities.