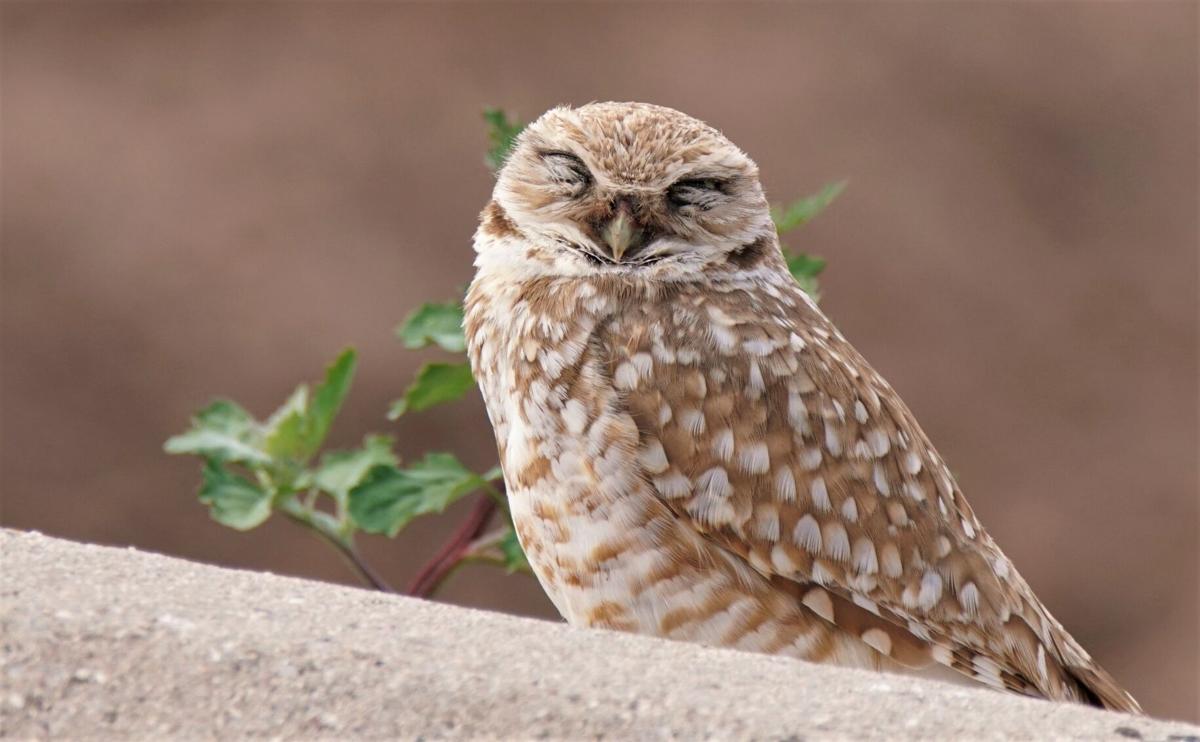 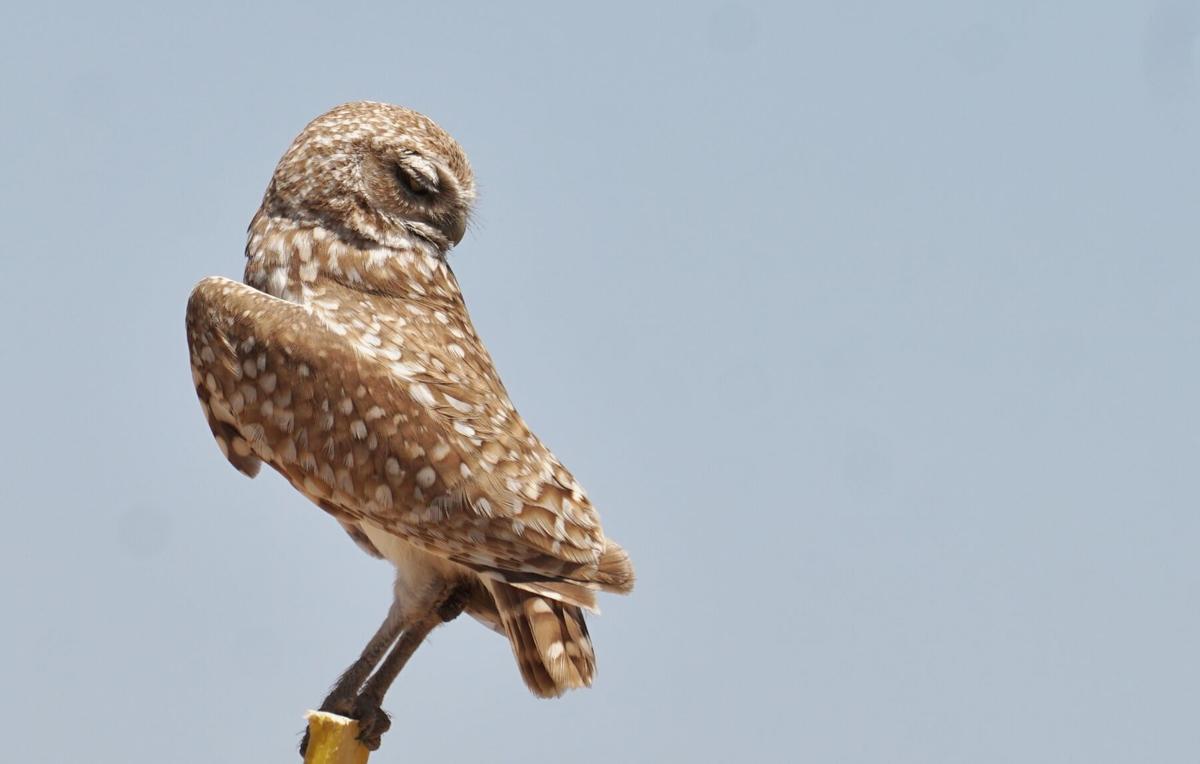 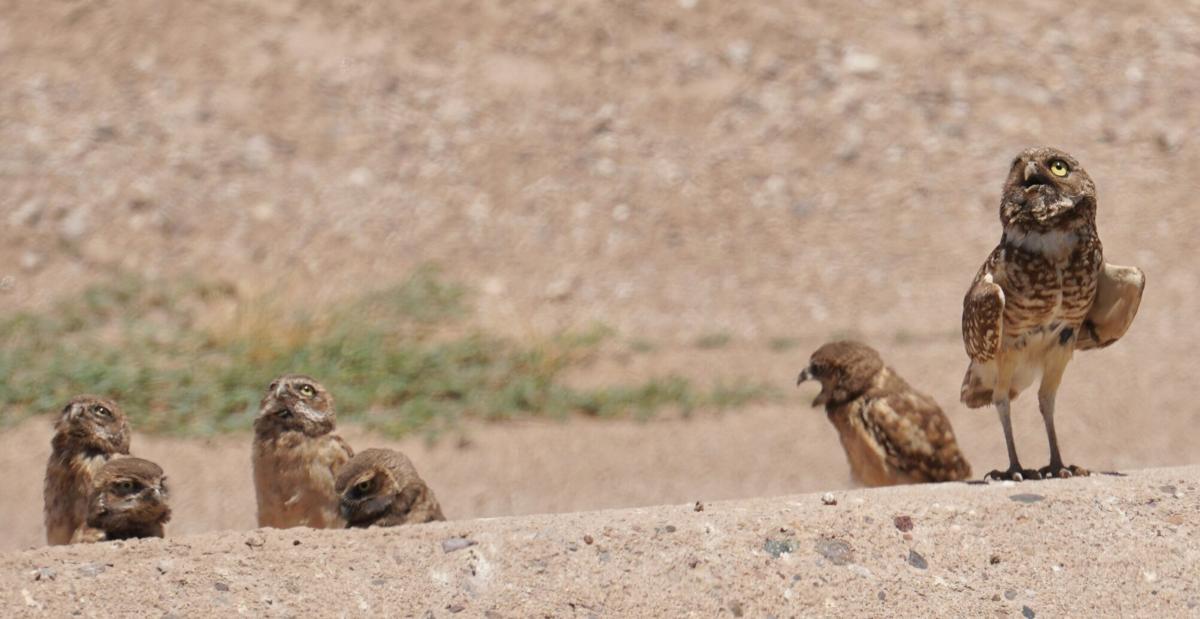 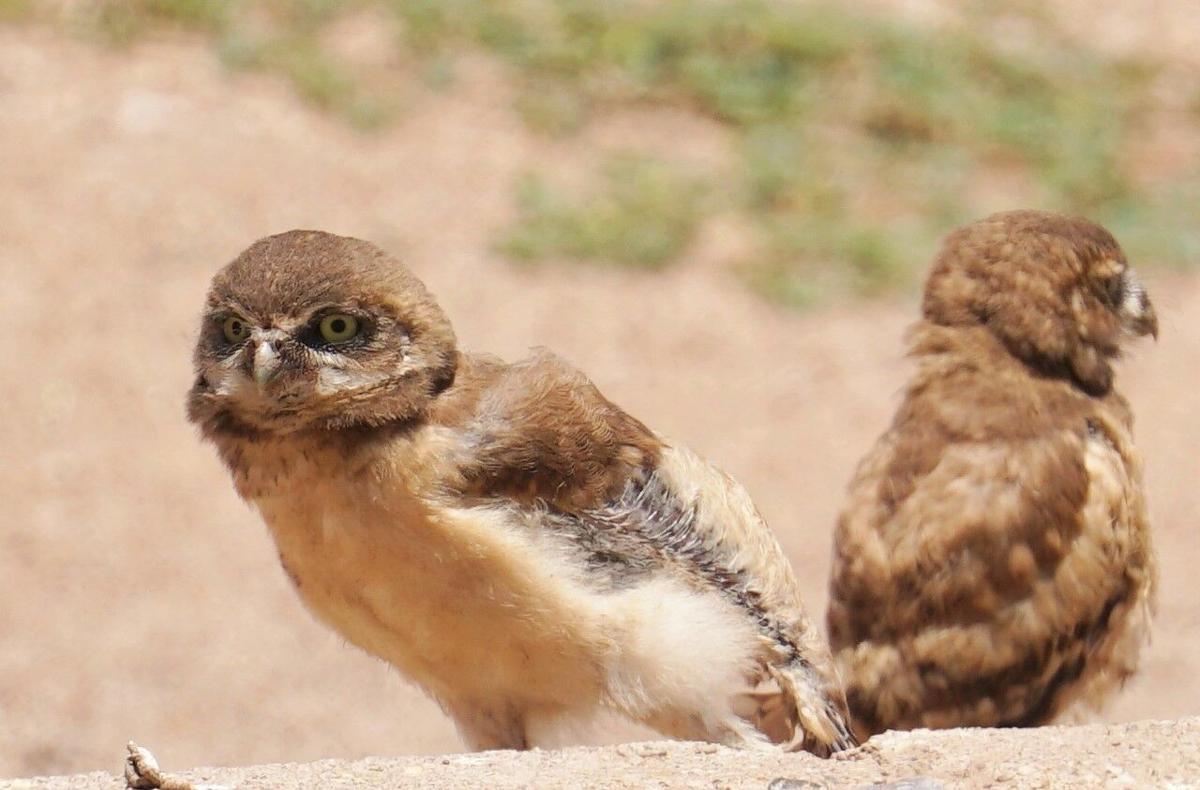 Back to back baby burrowers 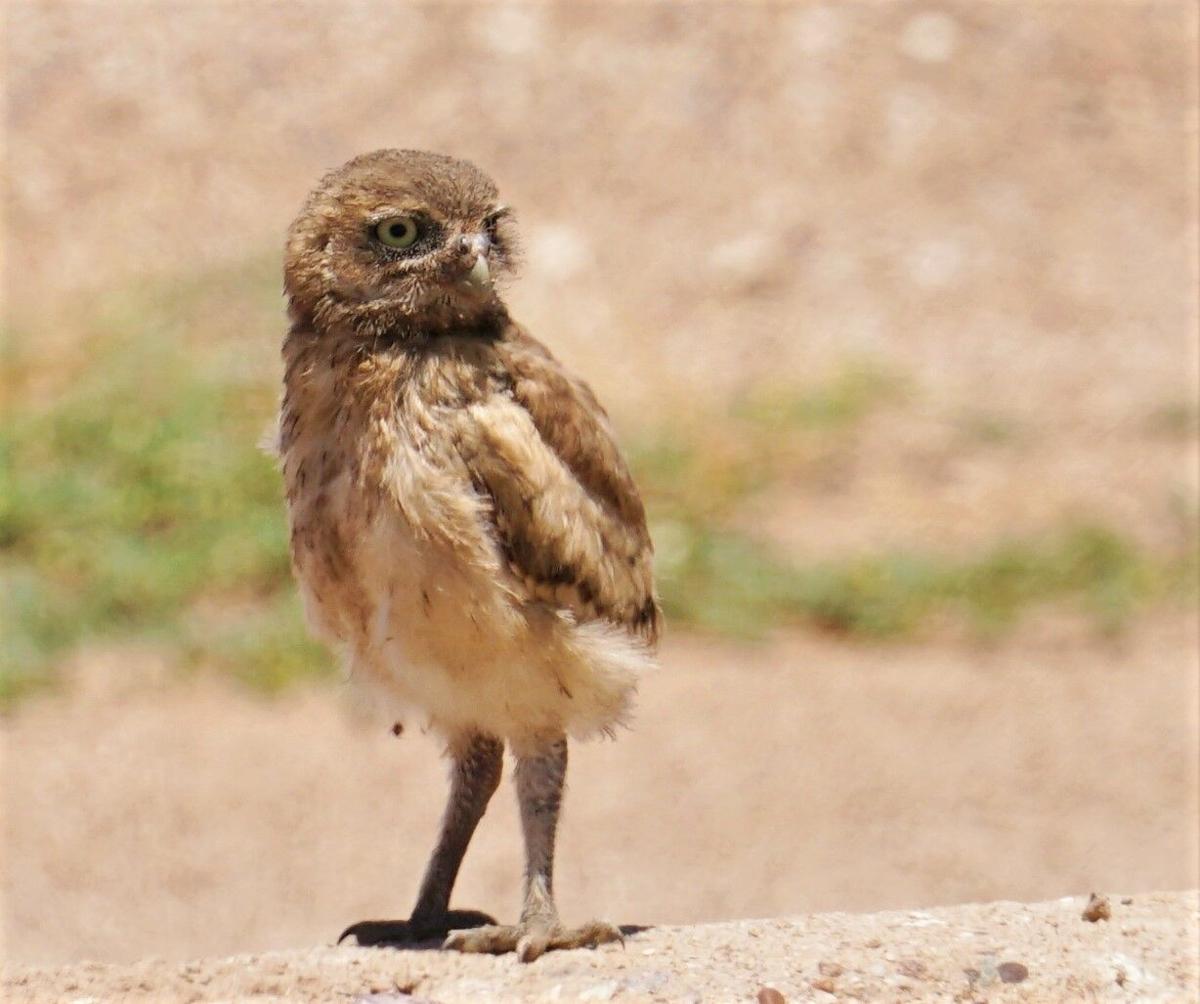 Not yet ready to fly 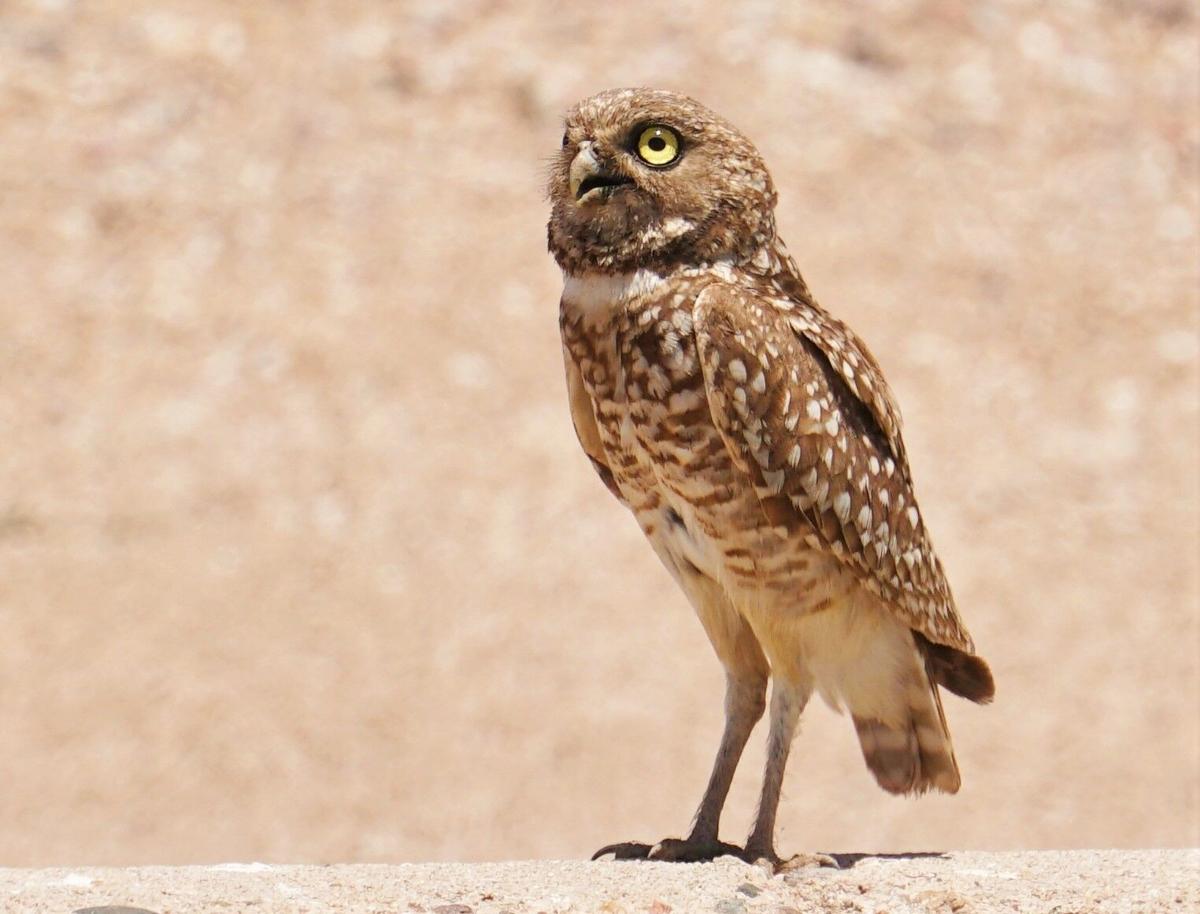 Back to back baby burrowers

Not yet ready to fly

As a family of birds, owls are unique and fascinating. They are nocturnal predators with large night-vision eyes, stealth-silent wings and sharp beaks and talons. No wonder they have fostered myths and folklore. Owls range in size from 5.5-inches to 29-inches, and our most familiar one, the Great Horned, is found in all 49 North American states and is one of our largest at 22-inches. At the other end of the spectrum is the Elf Owl, at 5.75-inches our smallest owl, and one that is found in the U.S. only in Arizona, New Mexico and Texas. Of all these fascinating birds, one of the most interesting and unique is the Burrowing Owl, a bird that has been described as a ‘can of beans on stilts’.

The Burrowing Owl, a long-legged small owl at 9.5-inches, is aptly named since it is the only owl that roosts and nests in underground burrows. These burrows are sometimes dug by the owls themselves, although in Arizona where dirt is near impregnable caliche, they rely on other critters, like prairie dogs, to do the digging or they find suitable substitutes like culverts. This reliance on prairie dogs nearly led to their demise in Arizona in the 1920s. Cochise County was known for its prairie dog villages, with some stretching for miles and with populations up to a half million prairie dogs. Cattle ranchers had no use whatsoever for prairie dogs, who barked constantly and put the ranchers’ horses at risk with their ankle-breaking network of underground burrows. In 1926, the U.S. Rodent Control decided to eliminate this ‘problem’ altogether, using poison gas which exterminated the entire population of southern prairie dogs in Arizona. This shortsighted decision hoped to see a proliferation of prairie grass for cattle, but by eliminating the ‘earthworms of the land’, the water-holding burrows dried up and rainwater ran off unhindered, depleting the water table and turning the rich grassland into a stark desert. It also eliminated the Burrowing Owl’s nesting sites, and nearly all the owls disappeared.

Today Burrowing Owls still exist, but in much smaller numbers and only with outside help. They are endangered in Canada and threatened in Mexico. Here in Arizona, they are a ‘bird of concern’, largely dependent upon help like that provided by Tucson Electric Power. For 17 years, TEP has worked with Wild at Heart to relocate Burrowing Owls to safer habitat. TEP has been building artificial ‘owl condo’ burrows on a farmland plot near Marana, and temporarily covering them with tents of perforated mesh. The owls can see out through the mesh, spotting predatory hawks before venturing outside, but the hawks cannot see inside the mesh, which only needs remain in place for a month.

Burrowing Owls are unique in another way as well. Instead of camouflaging themselves during the day like other owls, they perch and sleep in the open near their burrows. Furthermore, they tolerate humans, resulting in lots of photo-ops of these cute and cuddly-looking creatures. They also bob up and down as they stand in front of their burrows, a welcoming look noticed by cowboys as they rode past, which led the cowboys to call them ‘Howdy Birds’. Before you decide to get too friendly with them, however, you should know that they line the burrow’s entrance and the burrow itself with cow and horse dung. This is done for the practical purpose of attracting dinner, like dung beetles, but still….. In addition, these monogamous birds eat invertebrates and small mammals, and like other owls they gulp down their prey whole. Their digestive system compacts the fur, bones and chitinous remains of invertebrates into pellets the owls eject from their mouths. You might rather kiss your dog than a Howdy Bird.

If you have questions or comments about SaddleBrooke’s birds, or to receive emailed information about bird walks led by Bob and Prudy, call (5230) 825-9895 or email bobandpru@gmail.com. Previously published articles can be found at www.birdingthebrookeandbeyond.com.