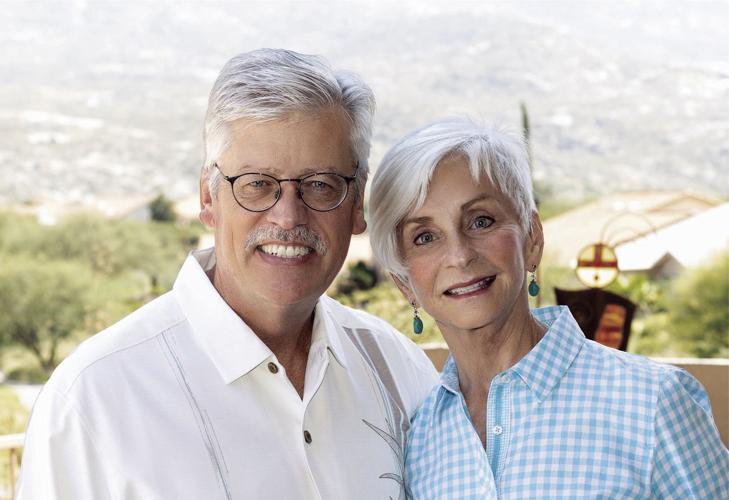 After a two-year stint as snowbirds, former Chicagoans George and Janice Tuttle were ready to set down permanent roots in SaddleBrooke in 2005. They required greater space and desired greater views than their Diego offered. Boasting one of the best views in SaddleBrooke, the Borgata they purchased on Samaniego Drive had nonetheless stagnated on the market for over three-hundred days.

While other buyers had passed on its dated, 80’s aesthetic of peach and aqua floral and striped wallpaper, brass fixtures, mirrored walls and white carpet extending into the master bath, the Tuttles were captivated by the property’s east-facing backyard view. It was a rare find, overlooking the 10th, 11th and 17th holes of the lush Tucson golf course, with a stunning direct panorama of the Catalina Mountains behind. Knowing dated finishes could be replaced, the Tuttles banked on the irreplaceable view and started down the road to remodeling. It was not to be a comprehensive remodel with a tight timeline, but rather a meandering path of remodeling stages.

Starting with the floor to ceiling basics, a crew removed all the carpeting and installed 18-inch variegated “Terra Marrone” porcelain tile throughout, while Al’s Painting stripped wall upon wall of wallpaper and textured and painted walls and the new baseboards. The rich caramel, brown tone of the flooring would ultimately be complimented with a warm and earthy color pallet of Dunn Edwards’ paint in “Boutique Beige,” “Tan Plan” and “Hope Chest” when a painting company repainted the entire interior of the home in 2021.

In the kitchen, a remodeling company re-faced the existing pickled oak cabinetry with a handsome rustic knotty alder topped with new Silestone counters. The Tuttles also opted to remove the view-blocking, head-knocking cabinets above the cooktop and vegetable sink peninsula. To compensate for the lost storage of the suspended cabinets, George later devised a solution to his wife’s delight. While replacing the home’s heating and cooling system the following year, he had the HVAC unit located in the hall closet installed in the attic above, then built shelving for a closet pantry. Then, the garage unit was mounted horizontally and suspended overhead, giving George more space for his workshop area.

In the home’s private retreats, Janice’s love for the color red is evident with both bedrooms painted a rich, tomato red and the laundry room’s vibrant deep cherry red LG machines. Instead of gazing into the bedroom from the wall most homeowners choose for bed placement, Janice opted to creatively angle the bed in the corner to look out at the mountain vista. The master bath was beautifully updated with knotty cherry Coventry cabinetry, featuring a granite-topped sink counters flanking a taller eight-drawer storage unit occupying the former open knee space. While keeping the plumbing in its original location, the sunken shower was tiled floor to ceiling and left open, while the former garden tub was replaced with a jetted tub lit by a new chandelier above.

In 2010, the Tuttles became acquainted with a SaddleBrooke resident with a remodeling company, whose crews would go on to complete various remodeling projects over the next decade. First, they were employed to refinish the large corner bar of the great room with new niches for a coffee station and glassware niches with tiling, glass shelving and specialty lighting. Three-years later, they were hired to construct a new built-in entertainment center with the clever reimagining of an existing piece of furniture. A favorite wood entertainment center was deconstructed to embellish the new built-in niche wall with topped by a soffit with arched openings that mirror those of the room’s western wall. The result is a unique piece of art that adds character to the space while housing a big screen TV too large for a traditional entertainment center.

In between those projects, the Tuttles turned their attention to the home’s exterior. A landscape company demolished the existing concrete driveway and flagstone walkway, replacing all with beautiful Bellgard Toscana Blend concrete pavers. He was employed again, four years later, to reconfigure and redesign the back patio, replacing tile and brick with pavers to match the front of the house. The back yard’s latest enhancement occurred in 2020 when VanStory Builders were called on to remove the patio cover’s central column; a project that involved capping a gas line, moving electrical wiring and a water outlet. The result is improved sightlines to the stunning views from inside and outside the home.

Returning to the home’s living space, the couple employed an artist to improve the great room’s fireplace surround. Drawing inspiration from the new floor tile, the artist transformed the formerly pinkish white painted rock wall to a natural looking stone; something the artist accomplished by painstakingly tinting each individual rock over the course of a week.

While the home had already seen an incredible overall enhancement, Janice still had one major improvement in mind. She wanted to raise the roof in her kitchen. “It looked like a flying saucer!”, said Janice, describing the former bulkhead that descended from the ceiling to form a soffit where cabinets once hung over the cooktop peninsula. What may have once seemed cozy, now appeared kitschy, and the homeowners wanted open concept to enjoy the light and fabulous view from the room’s east facing wall of sliders and windows. A remodeling crew took on the job of removing the wallpapered spaceship soffit, moving the wiring and HVAC vents to the attic, to expose the vaulted ceiling clear up to its soaring cathedral peak.

After 14-years of remodeling projects, the couple reflected on their stop-and-go remodeling modus operandi. “Sometimes the decision to make one enormous lump-sum, full-scale remodel can lead you to indecision and procrastination—even inaction, says George, “instead we took a couple of bites at a time and moved on when we were inspired to do more.” Janice summed up, “it gives you the time to reflect on what you really want.”