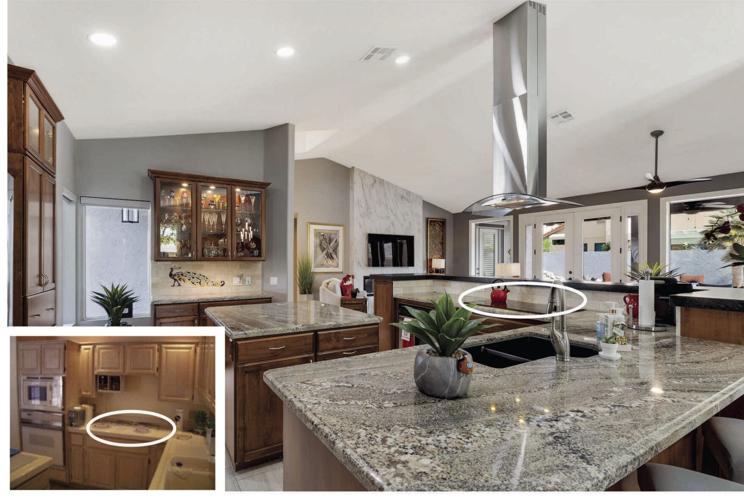 View from the kitchen peninsula looking toward fireplace feature and wall of windows to back patio. Inset kithcen cooktop locaction unchanged.

View from the kitchen peninsula looking toward fireplace feature and wall of windows to back patio. Inset kithcen cooktop locaction unchanged.

Without referencing their guidebook, attendees of SBCO’s 2021 Remodeled Home Tour would have been hard-pressed to identify the floor plan of home “C”. Walking inside may have only further confused the uninformed. What HOA-1 plan of the era was built with a wide-open, vaulted-ceilinged great room, where a homeowner could survey the entirety of the home’s entertaining space and office, both indoors and out, from the kitchen?

Impressed with the home’s light-filled, airy, open feel, attendees were surprised to learn that Dottie May’s Coronado was the smallest of seven homes featured on the tour, measuring a skosh over 2,000-square-feet. In fact, the 1990 built home bears little resemblance to the resale home that Dottie and Bill May purchased in 2004, nor any other Robson Coronado home in Arizona.

Among the rarer of SaddleBrooke floor plans, the original 1,850-square- foot, two bedroom/two bath Coronado with a combined living and dining room, a family room off the kitchen and 2two and a half car garage with a golf cart bay was only featured as a model in Robson’s Sun Lakes community. Originally a spec home, the May’s Coronado was built with upgraded 2x6 construction.

Purchased sight unseen in 2004, well before FaceTime existed, the Mays relied on Dottie’s sister Linda to help them select from a field of only 19 for-sale homes. The couple had decided to downsize with a fixer-upper they could make their own with the quality finishes they’d enjoyed in prior homes. Both had extensive real estate backgrounds and substantive remodeling experience after the severe flooding of Tropical Storm Allison in 1989 necessitated an eight-month reconstruction and renovation of their custom-built 4,000-sqare-foot Houston-area home.

Over the next 16-years, the May’s SaddleBrooke home would undergo a series of renovation and remodeling phases, utilizing a variety of contractors and subcontractors, culminating with a final phase in 2021, directed by designer Jo Savaugeau of JS Designs, who provided a cohesive, crowning touch to the Coronado.

First, the couple had contractor John Warkinton add space with a 13-foot x 9-foot office addition to the SE corner of the back patio, along with a laundry room bump-out into the garage space to widen the cramped laundry room. The contractor also removed the plan’s unsightly headbanger cabinets suspended above the kitchen peninsula, and Dottie herself took on the stripping and staining the kitchen’s pinkish pickled oak cabinetry—a project she would redo twice again.

Several years later, during the first remodel of the kitchen, the Mays had those cabinets refaced with custom-stained hickory finish and replaced the tile counters with rich gray Smokey Mountain granite, a lively stone highlighted by light and dark gray swirls and veining. Dottie had long despised the closed kitchen layout with its low-slung drop ceiling, calling it “the black hole of Calcutta.” The addition of new kitchen cabinetry on a blank kitchen wall and in the space of the former kitchen desk, along with the expansion of the island and the peninsula, provided the storage space to justify the removal of the light and view-blocking cabinetry above the cooktop. At the same time, new custom display cabinetry was built around the home’s one existing woodburning fireplace which the Mays had converted to gas log.

While her husband had embraced the active-retirement lifestyle of softball, tennis and gardening, real estate attorney Dottie did not acclimate so readily, wryly explaining, “I flunked retirement!” After a brief foray as Development Director for UofA’s BIO5 Institute, Dottie returned to her first love of real estate, obtaining her Arizona real estate license in 2007, just before the real estate market and her husband’s health both rapidly declined.

With Bill debilitated by a stroke in 2008, the couple prioritized disability accessibility with the master bath remodel, raising the height of the sunken shower floor and widening the very narrow toilet room doorway to allow for wheelchair access. A few years later, both bathrooms were completely remodeled with dark grey quartz countertops, new custom cabinet bases and new fixtures and lighting, with a floor-to-ceiling tiled shower with a frameless glass door replacing the hall bath’s tub/shower combo.

Several years after being widowed in 2012, Dottie regained momentum and doubled down on her efforts to create the home of her dreams. She fulfilled her initial wish to make a dining room of the existing family room, allowing for a more spacious living room where the TV now resides. She also determined, once and for all, to get rid of the eyesore of five different floor coverings. With the home’s interior encased in plastic sheeting, she sequestered herself, two dogs and the cat in the master bedroom to wait out the three-week project of demo and new installation of a stone-look porcelain tile and elegant new 5-inch base throughout.

Weary of shivering in the winter and roasting in the summer in her east-facing living room, not only did Dottie want increased energy efficiency, but also a more symmetrical look for the home’s back wall of windows and sliders. Working with contractors , the sliding door and surrounding windows of the back wall were replaced in 2018 with lovely, centered French doors flanked with matching low-E picture windows which a carpenter masterfully finished on the interior with wood casing. Delighted with the result, Dottie proceeded to replace every window in the home, adding two additional single-hung windows (the only windows which open) to provide both additional light in the hallway and required egress for the guest bedroom.

In the front of the home, curb appeal was heightened with pavers installed from the driveway to the front walkway which leads to a private front courtyard with a handsome iron gate and dramatic, 42-inch wide custom iron and glass entry door to replace the former narrow door and sidelights. Both were hand-forged by San Juan Iron LLC, based on the homeowner’s own design. Above the doorway, the incongruous eyebrow window was replaced with a rectangular one. The home’s exterior was painted with Behr’s ‘Elephant Skin’ and the garage doors with a contrasting ‘Barnyard’ that complements the home’s ironwork.

Craving more organization, Dottie had the master closets reconfigured by California Closets for more attractive, practicable storage. She also designed two Japanese-inspired Shoji-style barn doors to close of the walk-in closet and separate the dressing/bath area from the bedroom. In the kitchen, the original gas cooktop and downdraft were replaced with a GE induction cooktop and sleek Proline stainless steel and glass range hood, and a multi-function GE Adventium oven was added. The laundry room’s reach-in closet was retrofitted with a cabinetry surrounding a mudroom bench and the bulky appliances were replaced with narrow depth Electrolux washer and ventless dryer.

Still dissatisfied with the confined kitchen space, Dottie turned to a professional designer for the home’s ultimate remodel phase . In doing so, Dottie followed her own advice: “Consulting with a decorator is always a good idea when renovating and a small price to pay for the great design cohesion in the end.” Challenged to further open an already remodeled space, the designer devised a plan to remove the primary floor-to-ceiling pillars that flanked the kitchen counters, employing Santa Cruz Remodeling and Barron Electric to reroute the plumbing, HVAC venting and electrical lines needed to raise the ceiling to its underlying vault.

With the drop ceiling removed, the new wall height allowed space for installation of an additional row of lighted display cabinetry above the back wall, which add sparkle and color to the space. Where the pillars once stood, handsome cabinetry was added to hide plumbing and provide storage. Topped with a gray leathered granite, a new counter spans the new end cabinets, providing a backsplash for the cooktop and neatly defining the kitchen and living spaces. An additional chimney extension was added to the range hood to reach the newly-exposed 12-foot ceiling peak. Superfluous room divider walls were removed on both sides of the kitchen, and the office was afforded separation from the dining room with the addition of a wall of JELD-WEN windows and double French doors, fitted with rain glass to afford privacy without sacrificing light.

The final coronation of Dottie’s Coronado was Jo’s design for a new fireplace feature wall of Carrara look porcelain tile, seamlessly installed to mimic a floor-to-ceiling marble slab. Its electric ribbon fireplace insert, balanced by a big screen TV above, now provides a primary focal point. The designer added punctuating pops with two striking contemporary lighting fixtures; one boldly swirls above the foyer and the other spirals in a cascade above the dining room table.

For the retiring designer, Dottie’s final home improvement was a delightful project that stretched her creatively while working for a client that the designer credits as “imaginative, creative and supportive.” Out of their collaborative efforts emerged a finely honed, customized jewel box of a home, rebuilt smarter and elegantly adorned with top-quality materials, upscale detailing and custom built-ins. Says Dottie May, a former real estate appraiser, “I’ll never get out of it what I put into it financially, but I do get a home that I thoroughly enjoy being in and absolutely love sharing with others!”