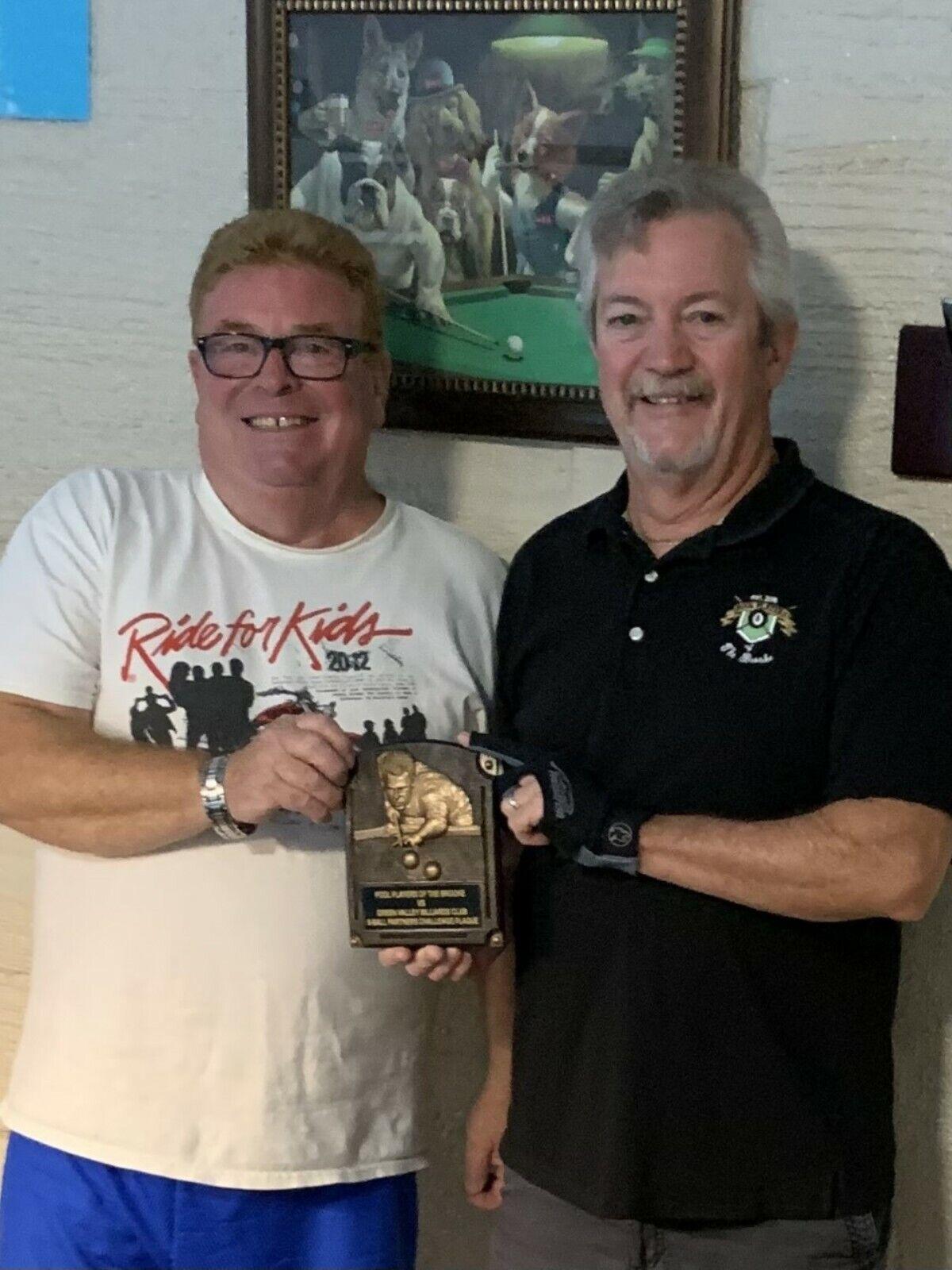 Dominic “The Doctor” Borland again grudgingly handing over the Bronze Plaque to Ken Watson of GVR. 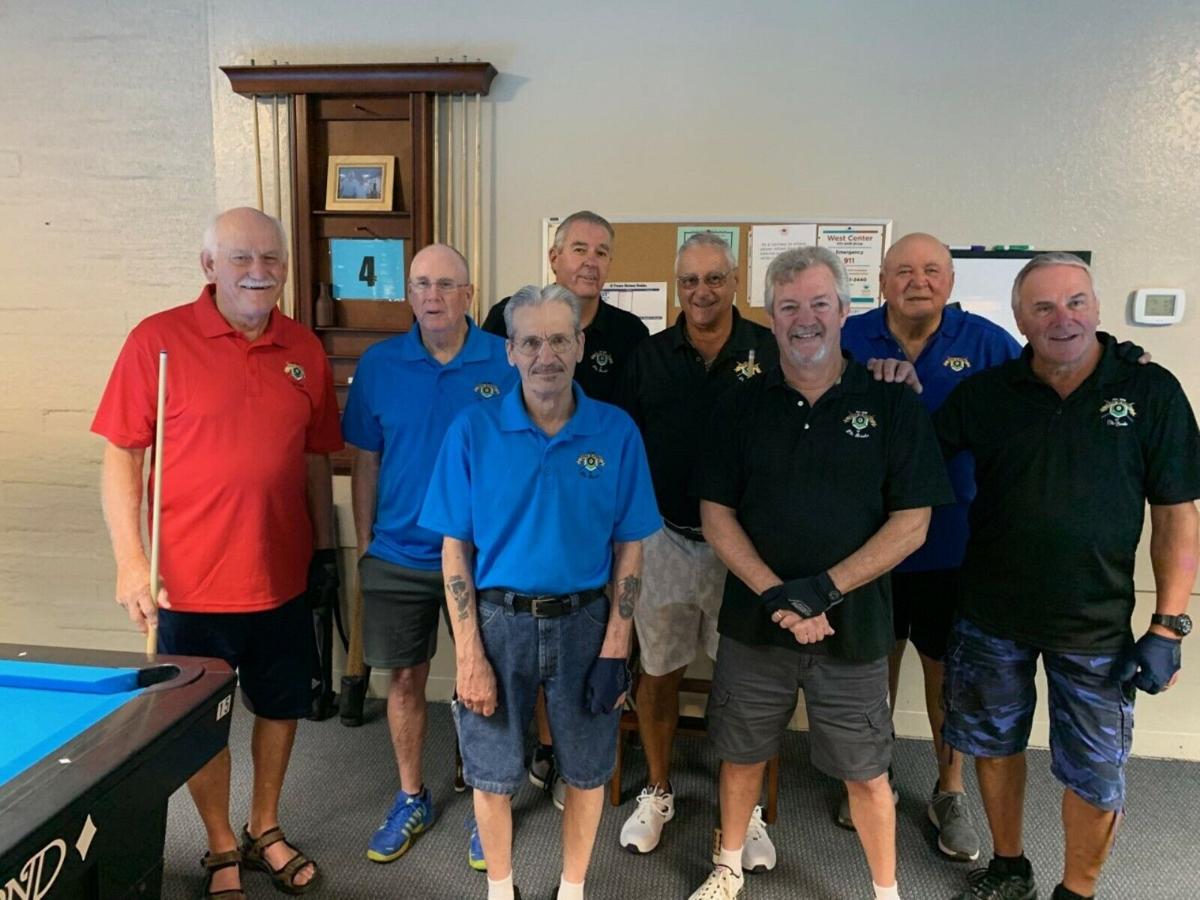 Dominic “The Doctor” Borland again grudgingly handing over the Bronze Plaque to Ken Watson of GVR.

The Pool Players of the Brooke (PPB) would like to thank Green Valley Recreation’s Billiard Club, Ken Watson, Harry Clark and GVR’s team for their pool table prowess, camaraderie, friendly competition and a congenial luncheon at the 19th Hole Grill after the 8-Ball Challenge. Another big THANK YOU goes out to Dominic Borland PPB Travel Team Captain for organizing this event.

On Saturday, September 18, the PPB’s Travel Team ventured down to GVR for an 8-Ball Team Challenge. Lisa Wilding from GVR was the Tournament Director and as usual kept us all in line all the while keeping the event moving along flawlessly. We were competing on four beautiful nine-foot Diamond pool tables for temporary ownership of a traveling bronze plaque that has been in GVR’s possession since December 10, 2016. Our team was made up of four, two player teams and Green Valley also had four, two player teams.

Our teams consisted of Fred “The Baker” Dianda and Gary “One Rail” Barlow, Dominic “The Doctor” Borland and Joe “Fast Eddie” Giammarino, Tony “The Snake” Cardillo and Phil “The Fixer” Jelleff, Jack “Crash” Hoverter and Lowell “8-Ball” Hegg. Our opponents from GVR were Ken Watson and Jack Prescott, Harry Clark and Sam Yulish, Dick Foley and Bob Hamilton, and Dave Kroth and Richard Ohnstad. The format was simple and interesting. Each of our teams would play each of their teams three games of 8-ball with each game won being one point for the winning team. There was a total of 48 points in the match. GVR won the first round, eight to four.

The second round gave the PPB some hope when they returned the favor and won the round eight to four. After the second round we were tied at 12 to 12. The third round was again won by GVR seven to five to make the score 19 to 17 in GVRs favor. The PPB went into the final round down two games which meant the PPB would have to win this round by an eight to four margin to bring the Bronze Plaque back to SaddleBrooke. Not this time, the PPB was only able to tie the round with a six-to-six score. This was not enough to overcome the talented GVR cueists, and the final score was 25 to 23. Congrats Green Valley Recreation!

Again, we got a chance to visit the Bronze Plaque that has been on the GVR’s wall for close to five-years while we have an empty nail on the PPB’s wall in SaddleBrooke. We were soooo close! This event was a continuation of a friendly but fierce rivalry. SaddleBrooke is proud of their team, and they thank GVR for hosting our team. Relish your win and continue enjoying the Bronze Plaque on your wall, compliments of the PPB!

For questions, email Joe Giammarino at jgpool@outlook.com. Visit the Pool Players of The Brooke online at https://poolplayersofthebrooke.blogspot.com/.