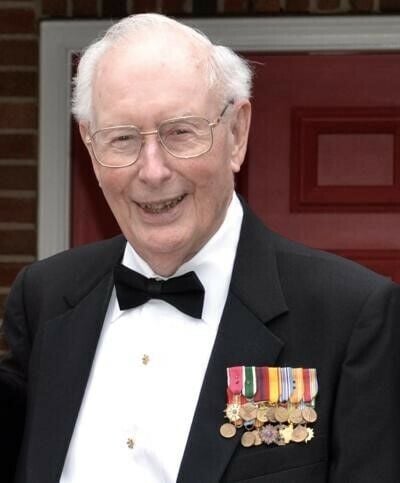 Major General H Lloyd Wilkerson, USMC (Ret.), passed away on Monday, October 11. On Halloween, he would have been 102-years-old. He was my cousin.

Lloyd grew up with my father in a Troy, Tennessee farmhouse, sharing the same birthday. He was a true 100 percent red-blooded American patriot. I met him at the Pentagon when I moved to Washington, D.C. in 1975 to be press secretary for an Indiana Congressman. My dad was visiting, and I set up a meeting at Lloyd's office. The two of them had not seen each other for decades and gratefully reminisced their time together as youngsters back in Tennessee. It was a family moment delivering a lifetime memorial that endears my soul. And it was the beginning of an extraordinary relationship.

Here's the story of the general's distinguished military service. After the Japanese bombs dropped on Pearl Harbor, cousin Lloyd was in line the following day at the Marine Corps Recruiting station to enlist. He saw combat at Guadalcanal, where he became a platoon sergeant. It was there that Chesty Puller, the most decorated Marine in history, asked Lloyd to drive him in his Jeep to headquarters. Puller "invited" Lloyd to join his battalion, promising, "I'll make a real Marine out of you!" Soon after, the Marine Corps sent Lloyd to Officer Candidate School.

On September 2, 1945, the day the Japanese surrendered on the Arizona in Tokyo Bay, Lt. Wilkerson was in Tsingtao, China, and witnessed the surrender of Japanese Forces in North China. His American warrior experience took him to the fight at Chosin Reservoir in the Korean war. Later he commanded the First Marine Regiment in Vietnam. After achieving the rank of Major General, the 3rd Marine Division became his responsibility. Over three wars, Wilkerson, the former Jeep driver, commanded Marines on every level, squad, platoon, company regiment, division, post, and amphibious forces overseas. He retired from the Marines with 37-years of service.

General Wilkerson was a walking talking, jam-packed Smithsonian Museum of History. He often reviewed my columns for this paper providing distinct slants and complexities of experience on subjects that only he could evoke. I asked him about all the presidents he served under responding with a litany of privileged historical observation. I wondered about Truman, my favorite. Lloyd recalled that in mid-1945, he was promoted to second lieutenant in route to the western Pacific as an infantry platoon leader. He told me that "Army and Marine Divisions were planning amphibious landings on the Japanese home islands. Estimates of American casualties were 1,000,000 killed and wounded for the capture of Japan. The survival of lieutenants commanding the leading elements on the beaches of Japan was less than 25 percent. By dropping the two atomic bombs, President Truman saved my life!"

For me, the glory of his being was like a second dad. Through him, I relived my father, who passed away in 2005. Lloyd provided firsthand knowledge and anecdotes about my dad back in that small Tennessee town, giving my heart promise with family lore, producing grand, glorious memories. I will miss his heartening private communications.

The Greenville News, his local newspaper in N.C., recently wrote of him in an obituary. "All of his accomplishments do not nearly describe the man he was a loving husband; a caring father, grandfather, and great grandfather; a mentor to hundreds; a strong warrior who cared about people; a man with high standards who was not self-righteous or judgmental; a man who saw some awful things in his life, but still had a wonderful sense of humor and a delightful twinkle in his eyes."

My life is better because of Lloyd. The general taught me many things involving responsibility, discipline, ethics, and the value of service to our country. Combined with my father's teaching of hard-work, devotion, loyalty, and common human decency, I will be forever remembering them as my heroes. OORAH!

Award-winning writer Jerry Wilkerson lives in SaddleBrooke. He is a former press secretary for two U.S. Congressmen and a prior WBBM CBS Radio Chicago and Chicago Daily News correspondent. He is a retired police commissioner and Navy veteran. Email: franchise@att.net.